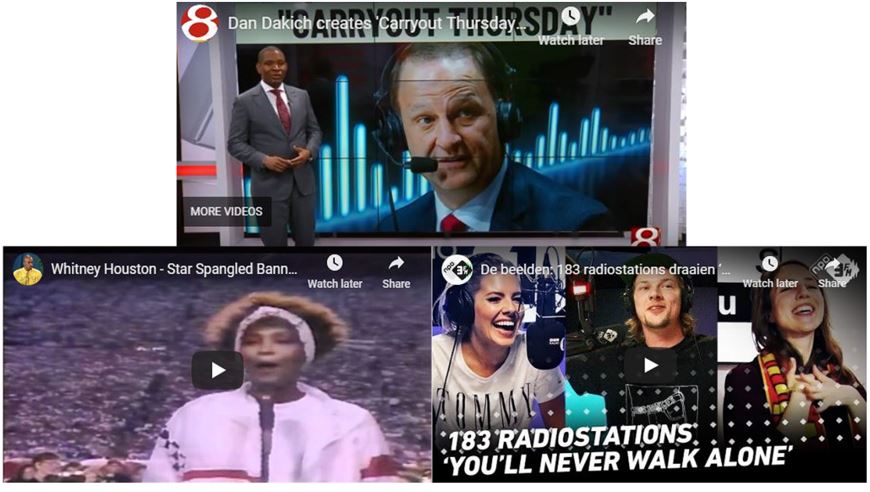 Yes, Radio delivers critical news information as people deal with COVID-19.  This in part why listenership goes up in times of crisis.

But Radio is also delivering hope and inspiration during these challenging times.  This is equally important to why the medium is popular and relevant.

After local officials ordered restaurants cease dining-in offerings during the Coronavirus crisis, Dan Dakich called for people to support local owners and their employees by ordering carry-out meals that evening.

The locker-room-type pep talk by the former IU basketball player and coach was embraced by more than just his audience on 93.5/107.5/1070 THE FAN, serving as an effective community pick-me-up.

In a rallying cry designed to uplift morale of millions during morning drive this past Friday March 20th, 183 radio stations across Western Europe and the U.K. simultaneously played the song “You’ll Never Walk Alone” by Gerry and The Pacemakers.

(The tune has become an emblematic anthem of the Liverpool pro soccer club, immensely popular all over the continent if not the globe, as fans years ago latched on to the lyrics while it plays in the home stadium during pregame activities.)

Encouragement is, of course, the key theme of this song originally from the 1945 Rodgers and Hammerstein musical Carousel.  And that’s exactly what disc jockey Sander Hoogendoorn with Netherlands’ 3FM wanted to express in a show of solidarity in a time of “social distancing”.

At Noon ET to start this work week America’s largest radio broadcasting company, iHeartRadio, had all stations in its portfolio play “a version of” The Star-Spangled Banner.

“It’s a tribute to every American, every family, every first responder, and every frontline health professional who is risking their life to keep us safe,” said CEO Bob Pittman in a statement. “We want to encourage the millions who listen to our radio stations every day to join together virtually, in song… We’ll get through this together.”

From Whitney Houston’s famous version recorded and released during the Gulf War in 1991 (and performed at the Super Bowl that year), to Jimi Hendrix’s famous guitar version played at Woodstock 1969, to Zac Brown Band’s rendition of the patriotic tune, radio stations all over the country in a small way tried brought America together.

These regional, domestic and international examples in the last week remind us that Radio is not only an informant to listeners, but also an important friend.

And like good friends, and family, Radio is a companion that supports and lifts us up when we need it.