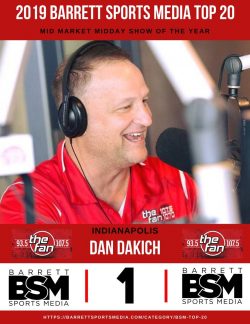 Voters were asked to consider the criteria below to judge the format’s best programs:

In recent years WFNI-Indianapolis has been recognized with BSM’s Top 20 in various categories, specifically the former midday program of The Grady & Big Joe Show and The Ride With JMV.  Last month The Dan Dakich Show repeated as the nation’s #1 midday mid-market program.

Dakich won the award last year by 22 points.  For 2019, he increased his lead, taking home the top spot by 41 points, thanks to the most 1st place votes (9) and appearing in the Top 3 on more ballots than any other show in the category.

Rock Stars In Their Own Right

Below is a republishing of my blog post 5 years ago – which is still relevant today – on how & why sports talk personalities like Big Joe, JMV and in this case Dakich far out-deliver for sponsors than rock ‘n roll.

But Indy’s leading sports station 107.5/1070 THE FAN, (with hosts who have ‘rock star’ sized personalities – including weekday Noon-3pm host Dan Dakich, featured in this Indy Star profile) is showing that THE FAN delivers audiences on par with the rock market!  Let me explain…