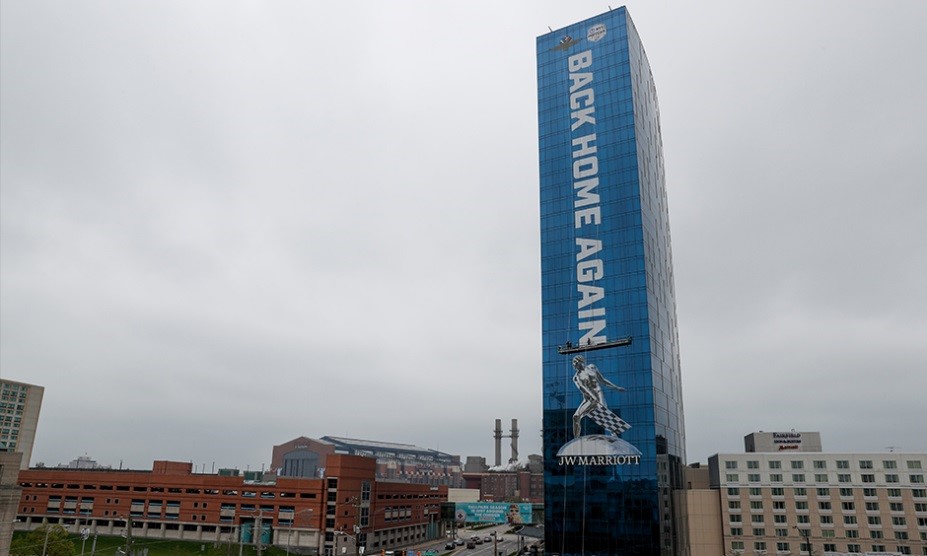 Entire City Abuzz Thanks To Track and Downtown Activities

If you’ve spent any time in the Hoosier state at all, you know race weekend is not to be forgotten.  While there are events throughout the month, here’s what we have to look forward to the rest of race week:

If you haven’t checked out the larger than life banner shown above on the JW Marriott then you’re missing out–it won’t be there for long!

The age-old Friday tradition is back and better than ever this year.  Following tradition, carb day will be the final practice and pit stop challenge but that’s only the beginning.  The Indy Lights series will be on-track for their annual Freedom 100 event that will give fans a preview for what’s to come on Sunday.

But Carb Day is mostly about socializing.  Because in addition seeing the auto racing activities, the $30 general admission ticket also includes concerts from rock and roll legends Foreigner and R&B chart-toppers Kool & The Gang.  But a cautionary word: It draws a big crowd. All 33 drivers are honorary grand marshals and will appear in the parade along with scores of bands and floats from local organizations.

One honoree this year is Sam Schmidt, a former race car driver who sustained a paralyzing spinal injury nearly twenty years ago but since has become a team owner and created a foundation to raise funds for medical research, innovative equipment used for rehabilitation, and quality-of-life issues.

The parade starts at 11:45am and will travel south on Pennsylvania Ave and north on Meridian; click here for spectator information and the route map. Concerts, autographs, and plenty of on-track history will be on tap.  Grammy-winners Zac Brown Band will be playing live and it’s the final chance fans will have to get up close and personal with the drivers before the main event happens. This really doesn’t need much of an introduction does it?  The greatest spectacle in racing will certainly live up to the bill this year as 33 drivers compete for racing’s most coveted prize. Oh, there will be an infield concert during the race.  If electronic music is your scene, then the Snake Pit is without a doubt Indy’s party of the year.  Thousands will pack the grounds to hear tracks from Skrillex, Alesso, Illenium and Chris Lake.