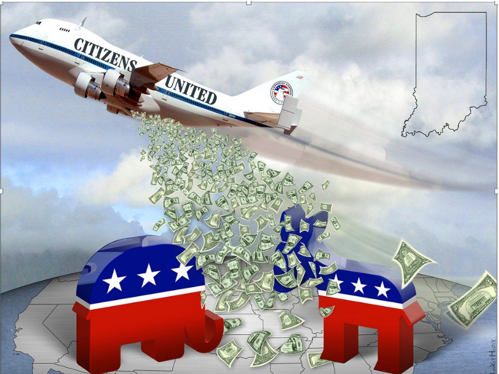 If you’ve turned on your radio, television, or are reading this blog, you’ve surely seen at least one of the hundreds of advertisements from outside groups trying to drive you to the polls and vote for one candidate or another this fall.

While candidates are required to disclose their donors and the amount of money each has given, political action committees (often referred to as PACs for short) are exempt from such requirements.  This autonomy was confirmed in the Supreme Court’s Citizens United ruling back in 2010.  The court found the Constitution prohibits government from restricting the speech of trade organizations, non-profits, and labor unions.  The result was, perhaps, even greater than the court could have imagined.  The ruling paved the way for hundreds of political action groups and their ads to flood the airwaves.

This election year is no different.  Indiana is home to one of the most competitive and expensive midterms in the country.  Democratic incumbent Senator, Joe Donnelly is squaring off against Republican businessman Mike Braun.  According to Borrell Reports, Indiana ranked 5th in the country on ballot issues ad spending.  That means Indiana has seen ads mentioning healthcare, the right to bear arms, and immigration reform than 45 other states.  But that only scratches the surface in the total amount of spending.

According to Open Secrets, a government transparency group, PACs have spent over $38 million in advertising on the U.S. Senate midterm alone.  The ads are often ominous and follow a familiar script.  In fact Kantar Media estimates over 85% of them are negative.

But these ads aren’t all negative.  There are pros.  Local broadcasters are filling their inventory which means more money for their bottom lines.  Also, research has shown voters are not often swayed by political advertising as long as both candidates or sides spend a similar amount.  In this race the spend is even and will surely continue to increase between now and Election Day.