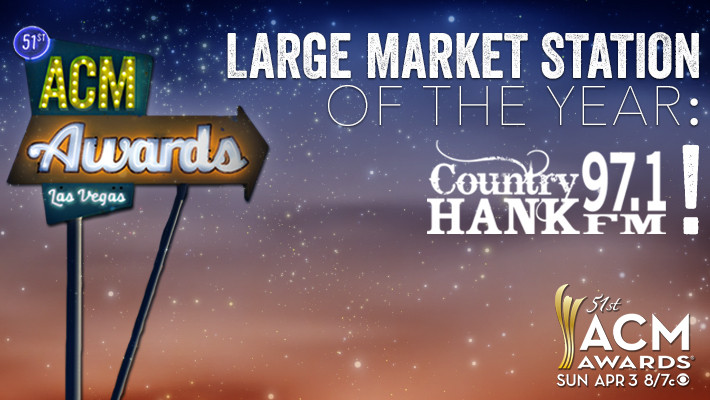 There’s cause for celebration on Monument Circle – Emmis country station 97.1 HANK FM won the Large Market Radio Station of the Year award at the 51st Academy of Country Music Awards!

“We are thrilled with this national recognition for the work the HANK FM team does every day – bringing the best music and events to country music fans in Indianapolis,” said Bob Richards, Vice President of Programming for Emmis Indianapolis.

The ACM Awards honor country music’s biggest stars and influencers, from musicians, to industry professionals, to concert venues, and of course, radio and radio personalities.  Luke Bryan and Dierks Bentley co-hosted the awards show, which was broadcast live on CBS.

Of course the HANK FM team wasn’t just there to win – they were there to work, too!  Morning show host Dave O’Brien caught up with numerous artists, broadcast live and available for playback via Facebook Live, as well as O’Brien’s artist interviews on the hankfm.com blog.

The always-captivating Carrie Underwood made time for HANK FM – no small feat for a star!

Maybe one of the more memorable interviews happened as a result of O’Brien spotting country star Kane Brown winding down his night with some New York-style pizza at 1:30am…while O’Brien was walking to the broadcast booth to start his day.

Congratulations once again to everyone at the HANK FM team for being recognized for a job well done, and continuing to push Indy’s country leader forward!