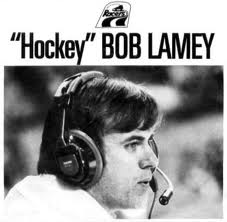 1070 There At The Start, And Today – Through Blackouts And Bad Teams, Sellouts And Super Bowls.

This is the 30th season for the Indianapolis Colts.

From playing home games inside the Hoosier Dome to in-or-outside thanks to Lucas Oil Stadium’s retractable roof…from losing seasons with the league-worst record to earn the #1 draft pick (three times) to winning seasons with 16 playoff appearances and a Super Bowl championship, there’s been a big swings of change during the Colts 3 decades in Indy.

But besides the iconic horseshoe logo, the following couple of things are the same today for Colts fans as they were in their inaugural season:

While these two elements are synonymous with the Colts to multiple generations of fans, that wasn’t always the case.

In 1984, the sports coverage most associated with each wasn’t football but the Indy 500 for the station and hockey for the announcer. That changed when then owner Bob Irsay was asked at his first local press conference who would air the team’s games on radio in Indianapolis, and he replied “the big 50,000 watt AM station.”

With radio announcers not part of the team’s assets packed in the middle of the night into Mayflower moving vans on the abrupt move out of Baltimore, the Colts had to rely on their new flagship radio station to identify talent. Lamey, who as 1070’s Sports Director has announced most every sport that’s been played in Indy, took just fine to pro football. However, many different color analysts have been alongside him in the broadcast booth. The list of former players or coaches or fellow broadcasters paired with Lamey on Indianapolis Colts radio broadcasts includes:

After the initial euphoria of pro football here, home games were not consistently sold out due to poor team play and a not yet established local identity; this led to TV blackouts throughout the team’s first decade or so in Indy and made radio often the only place to follow live game action. This was a big part of why Lamey became such a household name among Colts fans, along with his enthusiastic calls in support of the home team.

Today, Central Indiana is in love with the Colts. You can count on one hand the number of home games that haven’t sold out in the last decade, and Hoosiers not going to games get in on the action with “Blue Fridays” donning casual team-supportive wardrobes to the workplace.

In addition to Lamey, other familiar voices from 1070 are now heard all over the Colts Radio Network on game day. JMV and Big Joe Staysniak appear on the pregame show, and Greg Rakestraw anchors the postgame show.

And during the week, whether on-air or through social media 1070/107.5 THE FAN is where Indy gathers for Colts conversation.