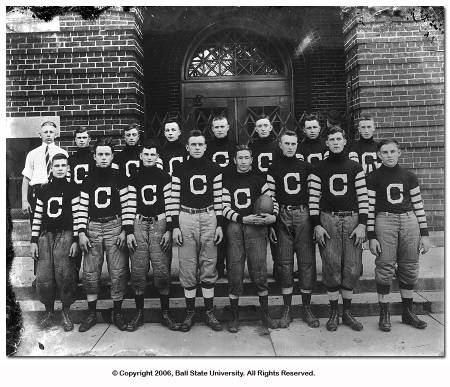 Many people believe 1984 is the year that pro football finally came to Indiana when the Colts moved to Indy from Baltimore.

But what most people don’t know is that two Indiana clubs were present and bought in as founding members of the American Professional Football Association (APFA) — later renamed the National Football League — on a muggy September evening in 1920.

“They always say Indiana is a basketball state, but not at the time, because they didn’t have gyms,” said Doris Cottingham, author of a book chronicling one of the game’s dominant early independent powers, ‘Pine Village Football, The Inside Dope.’ “It was football. There were fields everywhere.”

Midwestern towns like Canton, Akron, Fort Wayne, Muncie, Hammond, and Decatur fielded teams. Games and seasons were planned with little notice, with challenges and cancellations often coming less than a week prior. But there was an appetite for it, both from players and fans.

That famous business meeting in 1920 – which took place at a car dealership showroom in Canton, Ohio – sought to organize the various club teams around a more structured set of rules in order to advance the game. Legendary Olympian and all-around star athlete Jim Thorpe was elected president of the 14-team APFA in an effort to give the league legitimacy.

The Muncie Flyers, a club team from the Congerville Athletic Club, was indicative of the pro football environment at the time. With high expectations, they took the field against the Rock Island Independents – but were blown out so badly (45-0) that the following week’s opponent, the Decatur Staleys (later moved to Chicago and renamed the Chicago Bears), canceled their game with the Flyers. The following year again saw little success against APFA teams, and the team folded before the 1922 season. Despite playing only two seasons in the APFA, Muncie will always be noted as a founding member of the now gargantuan league.

The Hammond Professionals had marginally better success on the field – and much of it had to do with a star player. Pre-APFA, legendary Chicago Bears player, coach, and owner George S. Halas starred as a wide receiver for the Hammond Pros, establishing the team as formidable competition before leaving for the Staleys. But the lack of a home audience hurt the team. Most of Hammond’s games were played at Cubs Park – now Wrigley Field – on Chicago’s north side. Never able to achieve a winning record or the fan support needed to financially float the team, 1926 proved to be the last year for the Hammond Pros. Despite having its founding roots in midwestern small towns, the NFL shifted its balance to large metropolises on the eastern seaboard, whittling down to 12 powerhouse teams in 1927.

Almost a forgotten footnote in the history of the league is another Indiana club – the Evansville Crimson Giants. After competing as an APFA member during the 1921 season, Evansville played only three games in 1922 – the first year the league was called the NFL – due to disputes over a home stadium and team ownership and control. The franchise never reorganized the next year.

The 2006 NFL Championship won by the Indianapolis Colts was surprisingly not the first professional football title brought to the Circle City. The Indianapolis Capitols of the short-lived Continental Football League won the league title in 1969 – a 44-38 overtime victory that would turn out to be the CFL’s last game. A league that only lasted five seasons would appear to be an unpopular attraction. But that’s very much not the case. Not only did the Indianapolis Capitols draw crowds up to 12,000 people to Bush Stadium, but the franchise came very close to signing a talented rookie out of the University of Southern California named O.J. Simpson.

“Simpson was a rookie holding out from Buffalo, so [team owner Al Savill] flew him to Indianapolis, brought him to a Pacer game and supposedly offered him $1 million,” said Cy McBride, the former executive sports editor of The Indianapolis Star and the Caps’ former public relations director.

Simpson did, of course, sign with the Buffalo Bills of the AFL. But the seed of pro football was planted in Indianapolis, only to lay dormant until a fleet of Mayflower moving trucks – and a whole load of baggage – arrived from Baltimore in 1984.

As a new NFL town in the 1980s and 1990s, the Colts gained fans gradually. Playing in a small domed stadium with few superstars on the sidelines, the franchise took years to sway public fandom from the Chicago Bears (who had been around since the formation of the league, as noted).

The 2000s, though, saw the Colts become a breakout franchise, capturing the NFL championship in 2006. The excitement from the team carried over to the whole city – plans for a new state-of-the-art stadium were unveiled, and Indianapolis was awarded its first opportunity to host Super Bowl XLVI in 2012. The publicity and excitement surrounding the Super Bowl Village – entertainment, galas, parties, concerts, and yes, even the famous zip line over downtown – certainly would have been past the wildest dreams of some Indiana club team owners in a Canton car dealership in 1920.

Hoosiers in the Hall

You won’t find any Indianapolis Colts in the Pro Football Hall of Fame in Canton, Ohio (yet). But Indiana has a few connections to the Hall: