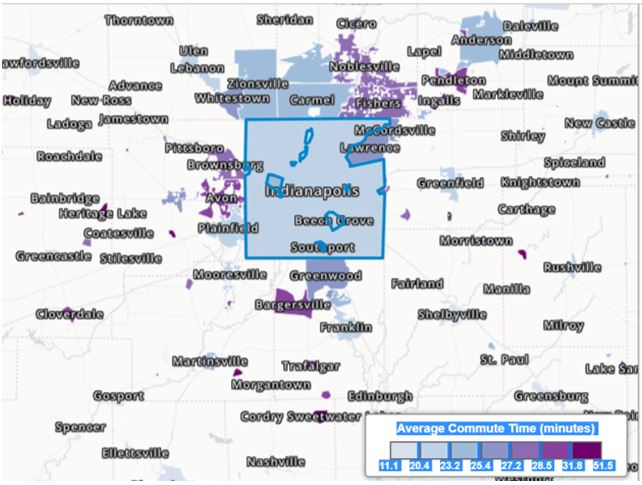 Reports Shows Drive Times Are Up By Nearly 33%, And AM/FM Is Listened To By 67% Of Drivers.

The typical American commute has been getting longer each year since 2010.

Indianapolis and the surrounding suburbs certainly feel the change.

According to a city-data.com report in 2017, the average one-way Indianapolis commute took 23.2 minutes.

Select communities experience even longer time in the car.  Below are average estimates this year during key drive times MF 6a-9a, 4p-7p from various suburbs.

Part of the reason for the jump is road/bridge/infrastructure improvements.  In 2019 there have been just short of 100 road construction projects done by varying municipalities – state, county and city governments.  Below is a list of closures this month by STATE-government-road-word impacting Central Indiana:

Based on these transportation and media research industry averages, Central Indiana drivers are now listening 40+ minutes a day to AM/FM radio while going to and from their place of work (up 33% from 30 minutes daily prior to 2017).

Yes, more time spent with the medium is real.

And so is this…  Compared to other media in which users are distracted with simultanious consumption of another platform – the “second screen” experience of reading or watching video on multiple devices at the same time – commuters listening to radio are a captive audience and engaged in the experience.

Radio advertising is a good value for Central Indiana businesses to reach new or exsiting customers.