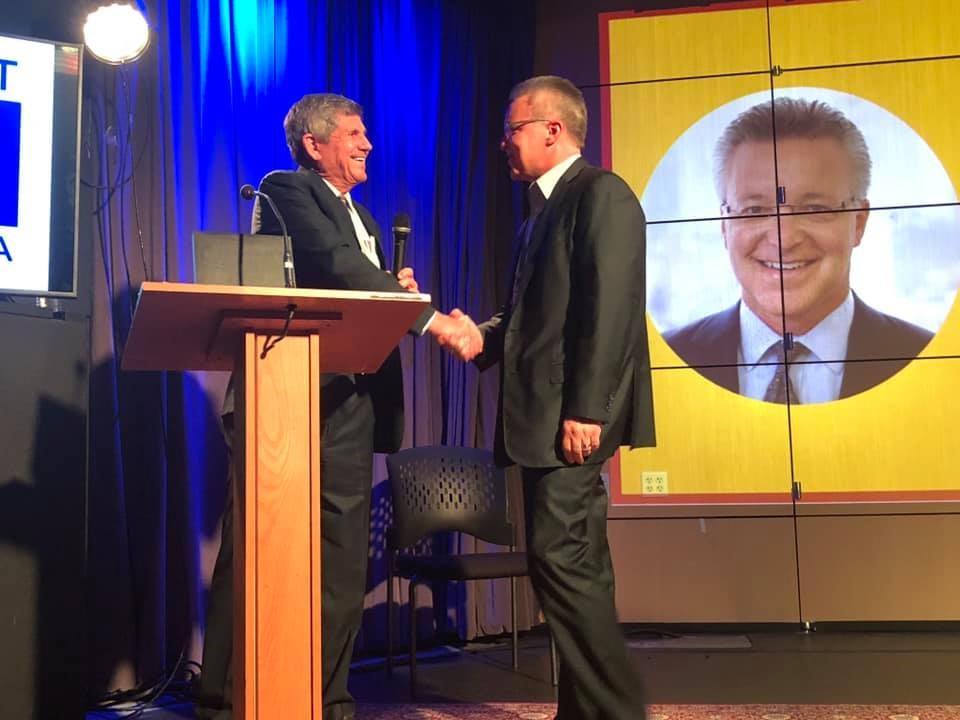 Last Week, Inaugural Presentation Given From One Sports Radio Legend To Another

When Emmis Founder and CEO, Jeff Smulyan started a 24/7 sports radio station in New York City back in 1987 there were a lot of people who thought it was a pipe dream.  The early days of the station might have been challenging, but fast forward thirty years and the venture has paved the way for hundreds of similar stations across the country.

It was announced earlier last year Barrett Sports Media would honor one radio professional who “has demonstrated a consistent ability to lead, take risks, and produce results” The Jeff Smulyan Award.

Last week the first award in honor was given to Kraig Kitchin in Los Angeles with Smulyan in the audience.

“I’m absolutely thrilled that Kraig has been selected as the inaugural recipient of this award,” Smulyan said.  “He has been a dynamic leader and visionary for this industry for so many years, and the fact that we’ve been friends for all this time makes it even better.”

Kitchin currently serves as the Chariman of the National Radio Hall of Fame and Co-President of the talent management firm SoundMind.  He was a key contributor that led to Jim Rome’s national popularity as a sports radio host.

“I’m humbled at the notion of receiving an award in the name of Jeff Smulyan,” Kitchin told Barrett Sports Media.  Kitchin went on to call Smulyan “a legendary broadcaster who exemplifies so many great leadership qualities and has led the way in making sports talk radio a permanent part of the American landscape.”

In addition to the award named after Smulyan, three other awards were given to radio professionals at the Barrett Sports Media Conference.