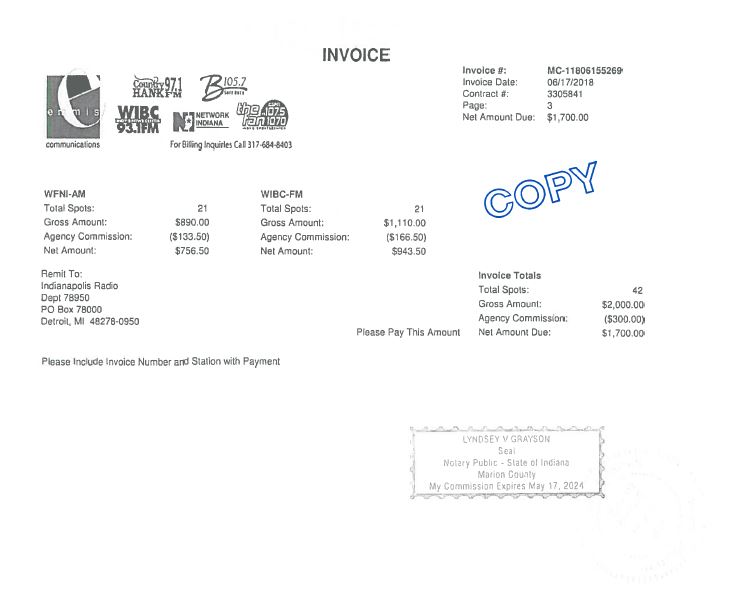 Every July, new state laws passed earlier in the year by legislators are enacted.  Sunday alcohol sales and school safety dominated media coverage at the statehouse this past session, a lesser known bill will make an impact on a number of Hoosiers.

The Indiana General Assembly updated the state’s notary laws.  While it might seem of little significance, it could impact your pocket book.

Notaries are public officials who are authorized to certify documents, administer oaths, and take affidavits.  Put more simply, they’re people who are licensed by Indiana—or other states—to certify that an individual signing a document is indeed who they say they are.

In order to be recognized as one of Indiana’s official notaries, one must be at least 18 years of age, be a legal Indiana resident, pass a state exam, and have an insurance policy in case they make errors.

When a notary seals or stamps the document, they’re certifying they witnessed the signing of that document.  It’s common for oaths, power of attorney, and copies of formal documents to require a notary.

The change in Indiana’s law was intended to modernize the Hoosier state’s laws and make them more in-line with the rest of the nation.  The Secretary of State’s office will keep an electronic log of each individual who is bonded.  Previously there was no way for the state to track this.  Additionally, it increases the bond requirement for Indiana notaries to $25,000.  The average claim is currently just under $20,000.

The law also allows notaries to charge up to $10 for a signature, rather than the previous $5.

Secretary of State, Connie Lawson, says “the work of notaries public touch many aspects of everyday life, and you never know how important the service is until you need one,” in an interview with the Hendricks County Flyer.

A Critical Role In Broadcasting

While using a notary for a personal matter might be an inconvenient hurdle, for broadcasters notaries are a necessity.

The practice of broadcasters relying on notaries dates back a number of years, originating because of the product being intangible.

Unlike a durable goods transaction in which a buyer takes a physical item from the seller, with advertising an intangible product is delivered to audiences, not buyers.  So proof of performance validation is needed.

Historically, individual station managers would certify that a sponsor’s commercial advertisement actually ran at the time it was slated to.  Before technology this was the only way for an advertiser to know their ad ran.  Notaries certified the signature of a station executive.

However, now most invoices are automated thanks to technology evolution.  Some say this process has become burdensome—especially as media companies continue to grow.  Gone are the days where radio stations are merely radio stations.  Many have a complex team that curates social media content, helps businesses adapt to 21st century consumers.

Notaries working with media companies today often certify several at a time and still act as the legal representative verifying the signature of a station executive or manager who, in theory, can validate the advertisement delivery.

So in a roundabout way, you can thank a notary when you hear an ad right before your favorite song is about to play.