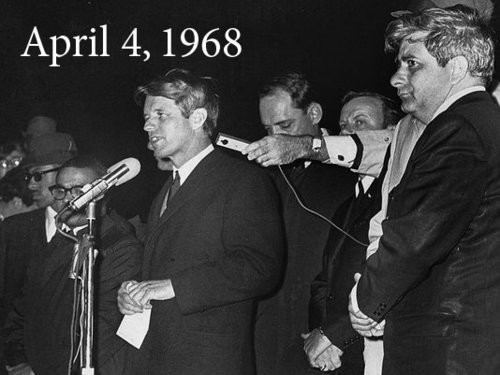 This story Below was originally published in this month’s edition of Indianapolis Monthly Magazine.

People came for a political rally. Then the evening took a darker turn.

Today marks half a century since the night presidential candidate Robert F. Kennedy announced to Indianapolis that Martin Luther King Jr. had been fatally shot.

As mentioned in our Editor’s Note, the popular narrative is that as a result of Kennedy’s words, Indianapolis remained peaceful while other cities violently struggled with the grief of King’s passing.

Given the special circumstances of Kennedy’s appearance, and his own death that same year, Indy is taking this anniversary to heart with a few ways to honor the 50th anniversary of the Civil Rights trailblazer’s assassination and Kennedy’s transformative speech.

(Last night attendees heard) firsthand accounts from people who were there when Kennedy gave his legendary speech that fateful evening in the acclaimed 2008 documentary A Ripple of Hope, by filmmaker Don Boggs, at the Indiana History Center. (There was a) pre-film reception and panel discussion after the showing to learn more about the significance of April 4, 1968… presented by the Kennedy King Memorial Initiative, Anderson University, Heartland Film, and the Indiana Historical Society.

Kerry Kennedy, RFK’s daughter, and  John Lewis, congressman and one of the 13 original Freedom Riders during the Civil Rights movement, will lead an open dialogue for the community on the morning of the 50th anniversary. Speak your mind, air your grievances, or simply reflect and listen as these national figures and other Indianapolis community members honor the longstanding legacies of King and Kennedy.

Later that evening at the same location is perhaps the most highly anticipated event in Indy for the half-century anniversary: the Kennedy King Memorial Initiative 50th-anniversary ceremony. An unannounced national Civil Rights leader will give a keynote address, and local school children will perform. Leaders expected to attend and participate in a panel discussion include Kerry Kennedy, Lewis, Mayor Joe Hogsett, and representatives from the Indianapolis City-County Council.

Other things to do:

Visit MLK Park and see the Landmark for Peace

Indy provides an immersive experience at Martin Luther King Jr. Park—the place where Robert F. Kennedy announced the news—with a bronze sculpture commemorating King and Kennedy. The two slain leaders are sculptures reaching toward one another. The park, on the corner of 17th and Broadway, was just recognized as a National Commemorative Site by U.S. Senators Joe Donnelly and Todd Young, and is an official part of the African American Civil Rights Network.

Go to the Indianapolis International Airport

Indianapolis Mayor Joe Hogsett helped unveil an exhibit at the Indianapolis International Airport at the beginning of March that features pictures and stories from people who were in the crowd for Kennedy’s speech on the night MLK died.

Dear Bobby: The Musical, a production commemorating the events of the night of Kennedy’s visit to Indy, premiered at the IndyFringe Basile Theatre on March 22 as part of this year’s OnyxFest, Indianapolis’s first and only theater festival dedicated to the stories and productions of African-American playwrights. This seven-production festival ended March 31.

Speak up at The Quest: A Discussion Program

King’s iconic statement, “We have learned to fly the air like birds and swim the sea like fish, but we have not learned the simple art of living together as brothers,” comes from his Nobel Peace Prize–winning speech, “The Quest for Peace and Justice.” Centered around this speech, which discusses the flaws that are rooted in our technologically advanced society and how we can overcome them, The Quest is a free discussion program created by Indiana Humanities and available to students, adults, community members, and any Hoosier who wants to invoke conversation about technology, humanity, and the social change that Dr. King spoke about in that speech.

Ransom Place Historic District. Martin Luther King Jr. Park. Lockefield Gardens. Throughout the month of April, these sites and several others in greater Indianapolis will be documented on a digital online map in an effort to commemorate notable historic places that represent the fight for African-American civil rights.