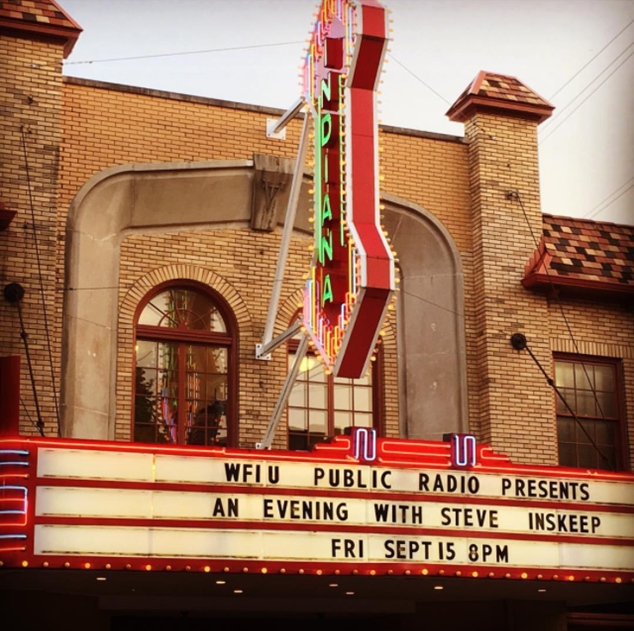 The host of the most listened to radio program in America returned home to the Hoosier state last week to be part of a fundraiser.

This past Friday supporters of WFIU-Bloomington, an NPR affiliate, heard Inskeep participate in an audience Q-&-A at the Buskirk-Chumley Theatre located just off the county seat’s courthouse square as part of the station’s fall fundraising drive. Among a wide range of topics, he talked about the current state of journalism, how technology has evolved broadcasting since he began his career in his NPR career two decades ago, and gave attendees a peek behind the curtain – such as his alarm going off at 3:00am and dozens of staffers assembling content – on the process of putting the show together the show each day.

Inskeep was asked what he likes about the medium of radio, and why it is still relevant today despite evermore growing journalistic/entertainment options; from social medial like Twitter and Facebook, to “pure play” audio options like Pandora or Spotify fueled by algorithms.  The following is his reply.

Often – even though we (NPR) do elaborate storytelling with sound, often the most powerful radio story is just one person talking, conveying their thoughts, the human voice, that’s a really powerful thing!

And it’s proven to be durable.  I am pleased to tell you that last fall, if you did not know, Morning Edition had the highest audience in the history of the program!

It (radio/audio content) turns out to fit well within a lot of people’s lives.  You can multi task – you can be cooking breakfast, dealing with kids, taking a shower while listening to radio.