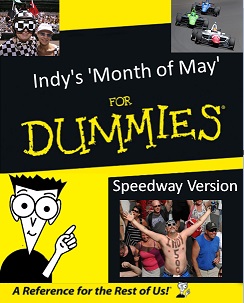 New To This Whole “month of May” Thing In Indy?  We’ve Got You Covered When It Comes To The Track!

The Indianapolis Motor Speedway is a two-and-a-half mile oval of asphalt and bricks on the west side of Indianapolis in the town of Speedway. But this small stretch absolutely dominates the consciousness of central Indiana for an entire month – and that month is now here.

The Indianapolis Star previously released “Month of May at Speedway for Dummies,” a guide for “fans who might not be familiar with the nuances of the month of May.”  We think that it’s a great place to start learning how everything works in preparation for the 101st running of the Indianapolis 500 on Sunday, May 28, 2017.

Here are excerpts that will help you on your way to becoming versed in the ins and outs of everything at the speedway.

What is the best day for a newcomer to experience the month? That’s a matter of preference, but pole day (May 21) is one option; Carb Day (May 26) is another.

Pole day, where the fastest car gets to start first — or “on the pole” — is mostly about qualifying for the May 28 Indianapolis 500.

Carb Day is mostly about socializing. It includes a short morning car & driver practice (11 a.m.), a race for the Indy Lights development series (12:30 p.m.), a pit stop contest (1:45 p.m.), a Steve Miller Band with Barenaked Ladies concert (3:30 p.m.) and general zaniness associated with Carb Day — all for $20. But a cautionary word: It draws a big crowd. Exploring the track is best on a practice day. Try May 15-22.

How does qualifying work? The rules have recently changed to accommodate modern racing. IndyCar details it as follows:

Determines the 33 positions in the field. A qualification attempt consists of four timed laps, and the driver may make as many attempts as he or she wishes. The aggregate time is recorded as the official qualifying time for the car.

Sunday, May 21: Qualifying and Pole Day:

Each entry ranked 33rd through 10th must make one four-lap attempt, in reverse order of qualified positions from the previous day. The fastest qualifier in this session would earn the 10th starting position down to the slowest starting 33rd.

Then, the fastest nine cars from first-day qualifying will run qualifying laps. The Indianapolis 500 pole winner is determined by the fastest qualifier in this session.

What is Gasoline Alley? It’s the nickname for the garage area. It originally referred to the corner of the property where the fuel depot was located, but over the years it came to encompass the entire complex. The term came into use in the 1920s, perhaps based on the newspaper cartoon strip of the same name that debuted in 1919.

What happens if it rains and how long does it take to dry the track? Cars can’t run on a wet track due to the use of tread-less tires. Delays depend on the amount of rain. Watch for the track to turn a darker shade, which will lead someone to say, “They’ve lost the track.” Drying time depends on the ambient temperature and the amount of sunshine available. Asphalt dries quickly on a warm day. But generally count on two hours from the time the final raindrop hits. If the race is rained out, the green flag will wave on the next available day. How much do race-day tickets cost? Prices range from nearly $200 for the seats perched high above the track in a turn or along the front straightaway to $40 for general admission (no seat). But fear not: There are few perfect places to sit because there is no view all the way around the 2.5-mile oval, so a radio comes in handy. Consider a covered seat if you want weather protection. Children 12 and under get in free for everything but grandstand seats on race day.

How much does parking cost? Outside parking is $20 for cars, $120 for all-weekend RV parking. Parking is $5 on qualifying and Carb Day. On property is no charge, if available (and it seldom is once the gates open). Many home owners around the track sell spaces. Prices vary on proximity to the track.

Can I bring my own food and drink to the track? Coolers (limited to 14-by-14 inches) are allowed, but glass containers are not. Otherwise, there are no restrictions. Why does the winner drink milk? The tradition started with Louis Meyer in 1936. The three-time race winner regularly drank buttermilk as a way to refresh himself on hot days, a tip from his mother. Milk was a part of the victory lane ceremony between 1937 and 1941, then again in 1946, the first year after World War II. The tradition disappeared for a few years but resumed in 1956. Only Emerson Fittipaldi in 1993 has deviated; he drank orange juice to support his business ventures.

What are the trophy details? BorgWarner first commissioned the winner’s trophy in 1935 for $10,000. Now it’s valued at more than $1 million. The original part of the trophy took its last face in 1986 (Bobby Rahal), and the only non-driver on the trophy is longtime track owner Tony Hulman. The base will be full of faces in 2034. The trophy stands nearly 5 feet, 5 inches and weighs approximately 110 pounds.

Photo credit to the Indianapolis Star

TM of Wiley’s For Dummies