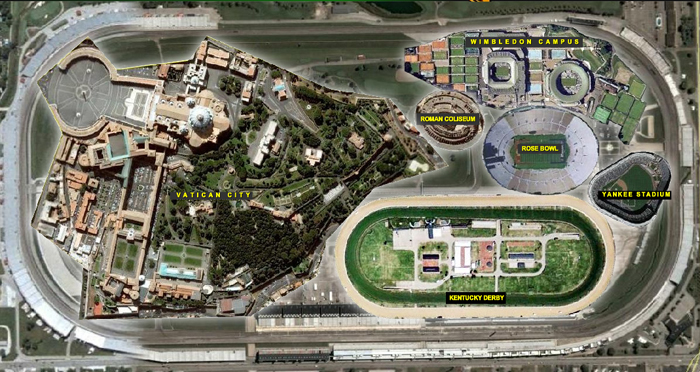 Attending the Indianapolis 500 Mile Race and watching the on track competition is very different from attending not just any other race but any other sporting event in person.

For example, you can sit in the last row of a large stadium for a football game and generally follow the action just fine without listening to the radio.  Ditto baseball, basketball, tennis, etc.

However, unlike just about any other stadium or sporting event you take in person, you can’t properly see the entire field of competition at the Indianapolis Motor Speedway.  That’s for a couple reasons:

The Indianapolis Motor Speedway is a massive physical structure.  Many iconic venues would fit INSIDE the 1,000 acres the IMS covers (see image).  Even aided by binoculars, it’s hard to properly follow live action 10 city blocks away at speeds above 150 miles per hour.  So Indy500 radio announcers reinforce to fans in the stands what they thought they saw blur past them.

The field of view from all seats at the IMS is partially blocked by grandstands, press boxes, luxury suites, and scoreboards on the inside of the oval race course.  This is due to the track’s slight banking for safety purposes.  Steeper banking allows cars to go faster.  The IMS does not need more speed because the mile-long straightaways already allow light open wheel cars to go very fast.  So the IMS’ minimal banking at 9 degrees, 12 minutes does not provide the raised, slanted angle for fans in the stands to view the course unimpeded like at many popular NASCAR tracks.  So Indy500 radio announcers tell fans in the stands what is happening that they are blocked from seeing on the course during the race.

Another key point — It’s too loud during the Race to hear the IMS public address announcer. With decibel levels comparable to an airplane jet takeoff, you can’t hear the person next to you, let alone venue speakers.  So Indy500 radio announcers tell fans in the stands lead changes, accident reports and other race news.

Weighing all these factors, it makes sense why so many fans at the track need the radio broadcast.

And consider this… even if only half of those attending the Indy500 in person – say approximately 150,000 – are tuned in, it delivers a larger total audience than any regular weekday morning drive radio program, or other top sports radio play-by-play…