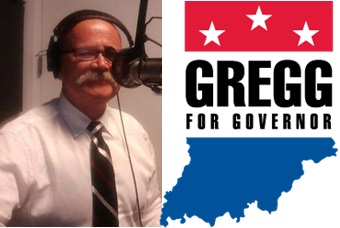 John Gregg hosted a couple different radio shows while he was Speaker of Indiana’s House of Representatives.

Kent Sterling:              Back in 1994 when we brought in Bruce Munson and John Gregg to do a show twice in the evenings.  Then about (2002), we needed a new host for “Saturday Open Phones” so we went ahead and pulled the trigger and put him on every week.

Kent Sterling:              The concept of the “Saturday Open Phones” is that somebody would sit in the room and just take calls.  John didn’t always adhere to that.  For example, this time of year he would go out in front of the studios and pass out pumpkins to people walking or driving by on Monument Circle.  He did things that were not always the best radio choice, but John Gregg is an honest guy with a big personality and a penchant for outrageousness.

Radio Indiana:           Did you work with John Gregg in terms of content delivery and being a radio host?

Kent Sterling:              I think he had all the potential to be really good at it.  He still does.  Getting any on air talent to perform in a way that’s best for them can be difficult.  With John only being on once a week, and frequently doing the show remotely from near his home in southern Indiana, we weren’t able to work on the formatting of the show as much, things like re-introduction to segments…  I think John liked doing the fun part but not so much of the broadcasting mechanics.  And we didn’t do a good enough job of making sure that he did the Radio 101 stuff. Radio Indiana:           Talk about his ability as a broadcaster to connect with people.

Kent Sterling:              There is a powerful connection between a good talk show host and the listener… it’s where in the minute you hear them on the radio you feel compelled to continue to listen.  Radio is a weird medium in that way, where you can tell pretty quickly if you like somebody.  That doesn’t come through much on TV but with radio it does.  And I think John Gregg definitely had that (likeability factor)… John has an every-man quality about him… he’s a real guy, an authentic person.

Radio Indiana:           How do you think that John Gregg’s experience in radio influenced his political career?

Kent Sterling:              I think John Gregg in politics would be largely the same even if he’d never have had his radio show host experience.