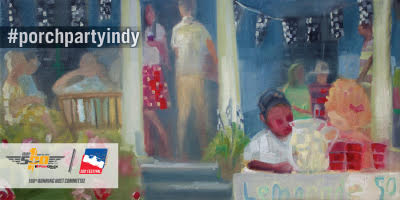 When a month won’t do, how about 100 days? That’s what the Indianapolis Motor Speedway decided, kicking off the 100th anniversary celebration exactly 100 days out.

The 500 Festival, the non-profit that’s long served Indianapolis with month-of-May events around the city and the state, commissioned a special 100th Running Committee to provide additional awareness and events outside of race day.  500 Festival board chair Patty Martin knows that the race is more than just a one-day sporting event – it’s a month-long celebration of civic pride.

“I was raised in Wabash, Ind., and I remember never having the opportunity to go to the race but always listening to ‘Back Home Again in Indiana,’” she said. “You always felt the race was a part of you, right? If you’re part of the state of Indiana, you’re part of this, and (the 100th) will give folks all over the state a chance to reconnect.”

Here’s what’s happening outside of Race Day in the community. Porch Party at the Harrison Center for the Arts with live music, vintage race cars, food trucks, and 500 Festival artwork.

The One America 500 Festival Mini-Marathon celebrates its 40th running, including the famous loop through the Indianapolis Motor Speedway as part of the runners’ route.

Porch Party in the town of Speedway, in conjunction with the Festival on Main.

Rock IN Roar 500 – Indy Car driver Will Power is an accomplished drummer.  He will join local rock stars and a total of 500 musicians to the OneRepublic song “Love Runs Out” in unison on Georgia Street.

Spectacle: Sights and Sounds of the Indy500 – Georgia Street pedestrians will be immersed in an Indy 500-themed light show, featuring the sounds of the 500 and some of the most memorable radio calls from 100 years of the Greatest Spectacle in Racing.

Race Through the Decades on Main – a celebration of 10 decades of Indy 500 history, free for all after qualifications on Main Street in Speedway.

Carb Night Burger Bash – Hosted by The Fan’s Curt Cavin and Kevin Lee, this free event takes over downtown at the Pan Am Plaza. Drivers and race teams are expected at The Fan’s live broadcast before live music takes over after 9.

The 60th edition of the IPL 500 Festival Parade takes to the streets of Indianapolis. As one of the premier parades in the United States, the celebration this year will be even more grand than in the past. Traditions abound though, as all 33 drivers will serve as grand marshals – lined up three-across just like at the drop of the green flag. Experience the Celebration is this year’s theme, piggybacking on the Indiana state bicentennial celebrations that are ongoing.