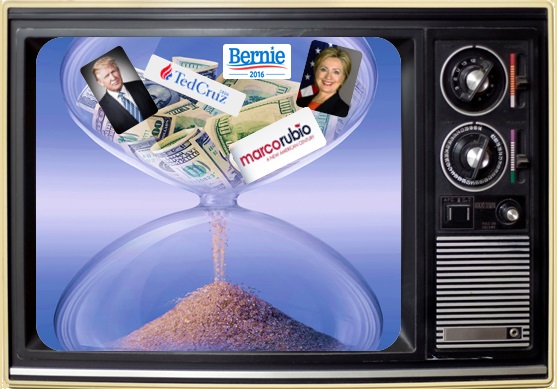 The individual state primary caucus elections have launched, which means the hi-jack’ing of TV viewers & regular advertisers has started!

Despite television consumers likely developing election-fatigue regarding the excessive coverage and commercials, political spending on broadcast television is predicted to increase overall ad revenue in 2016.  However the gain is likely to be short-lived.

These are predictions from some 300 media and advertising experts polled by Borrell Associates and published in a recent Radio & Television Business Report (the financial & regulatory voice for electronic media).

Broadcast TV should see a 19.7% increase this year over last, due almost solely to an influx of political advertising.  (Things might be even busier in Indiana because in addition to the Presidential election, Hoosier air waves will also be filled with local candidate commercials due to a competitive race for Governor and an open U.S. Senate seat.)  But the industry ride will fall sharply the next year according to Borrell.

The leading experts in monitoring and forecasting local advertising trends said, “When the tide recedes in 2017, it’s likely to show TV losing a significant share of its main advertiser, the auto dealer. Stations typically get 20% to 25% of their local ad dollars from this category, yet alienate these long-term loyal customers in election years when stations sell out their inventory to politicians.”

Cable will ride this year’s political advertising bonanza, but also appeals to local advertisers in its target ability (over broadcast TV stations), according to Borrell, which says to look for a 5.6% increase.  Cable and other electronic media forms like radio are likely to see an uptick in ’16 when traditional TV advertisers get bumped due to all the political ads.

The other punch to television is the rise of personalized, on-demand viewing over a stream rather than appointment live television.

While experts are all over the map at predicting when streaming overtakes live viewing, advertisers and media experts predict the “second screen” will overtake the first screen by 2018.

The bottom line — more than half of prime time television will soon be watched on computers, handheld devices and other devices than by traditional cable or broadcast.

Millennials are a principle driving force on this change in media behavior.  As highlighted in a prior post this fall, “cord cutters” and “cord nevers” are overhauling the industry with the way video entertainment is now being consumed.

So is 2016 the last big year for broadcast TV advertising revenue?