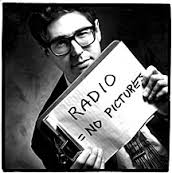 The creator of public radio program This American Life spoke before a sold-out audience at The Palladium in Carmel this past Saturday as part of a nationwide barnstorming effort to celebrate 20 years of the show.

This American Life has over 2.2 million weekly listeners on 500+ National Public Radio stations nationwide (Saturdays 2:00pm on WFYI 90.1FM locally).  Each 1-hour episode has a central theme with a variety of stories on that theme.  Most of the stories are journalism, with an occasional comedy routine or essay.  There’s more to the show, though it’s hard to describe… and that’s in part what show creator & host Ira Glass does on this “Re-inventing Radio” tour – he speaks about This American Life is and how it’s put together.

Live on stage Glass recreates the sound of the program playing funny or memorable moments from the show and talking about what was behind them.  He also explains where the staff finds the stories for the show and how to make them compelling to share.

“Don’t Think About It Like You Learned In High School”

Like he describes in this prior video, writing and storytelling in radio broadcasting is actually very different than how we were taught to tell write stories in high school English classes.

Broadcaster Ira Glass explains how to use the two building blocks of radio storytelling.

Glass says ditch the topic sentence followed by a listing of facts.  Instead, when on radio focus on using two key building blocks to tell your story:

Think about it… this tactic is one you hear in interesting radio shows – whether from syndicators like NPR & ESPN, or locally produced programs like The Dan Dakich Show, The Ride With JMV or The Smiley Morning Show.

And good radio ads often use it too!  Yes, a commercial’s timeline is maxed at :60seconds but you’ve heard it more than you realize.  Listing facts about your business might be important to you, but likely will bore the audience.  Instead, describe something going on in the prospect’s world and tell them how your business relates.

Do your radio ads tell a good story for the listener?