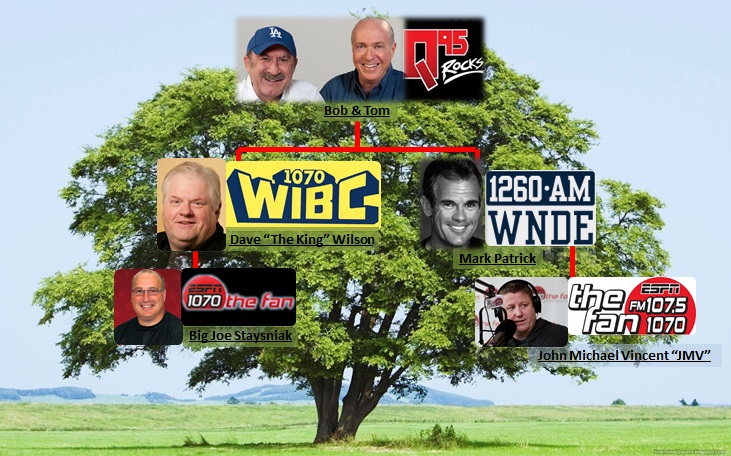 The Bob & Tom Show’s Bob Kevoian & Tom Griswold entered the Radio Hall of Fame last week on the strength of their on-air accomplishments.

Achievements are one thing.  But Hall of Fame legacies are judged by the influence they have on others.  Examples:

And like these examples in music and sports, The Bob & Tom Show’s legend for Indianapolis radio can be measured in part by the success of other radio talent they directly or indirectly influenced.  And the station best carrying out their legacy today isn’t Q95.

Like how Lennon acknowledged Elvis’ influence on him, Dan Dakich gave credit directly to Bob & Tom as key influencers in his broadcasting success during an interview earlier this year.

And Big Joe Staysniak and JMV are actual descendants of The Bob & Tom Show!

Both Wilson and Patrick had their careers blossom as key contributors on The Bob & Tom Show before branching out on their own shows and to different stations.

“My exposure with Bob and Tom led directly to getting opportunities,” Patrick said recently.  After his sports radio show, he became a local TV sports anchor, host of the Hoosier Lottery’s weekly TV show and eventually a nationwide radio host for both Fox Sports Radio and The MLB Network.

“The most appealing element I took with me to my program,” Patrick said is “they (Bob & Tom) are supremely talented at recognizing the strength of sidekicks and guests and putting them in the best possible position to succeed.”

About chemistry he developed with JMV on his show, Patrick said “he is about 10 years younger than I, so things I didn’t particularly care about from the ‘80s or ‘90s, he would have under control.  His ability to watch every sporting event that has taken place is somewhat otherworldly.”

And Patrick complimented how JMV carries on his, and indirectly Bob & Tom’s, legacy with quality broadcasts today.  “JMV has a gift for being able to talk about any subject – sports or life – that may come up on his show.”

So the case can be made that without The Bob & Tom Show, 1070 THE FAN doesn’t reach the heights of being today’s #1 local station for men.

And as Bob Kevoian announced his retirement last week, it’s easy to draw a conclusion that THE FAN is now Indy’s torch-bearer to carry on radio excellence.