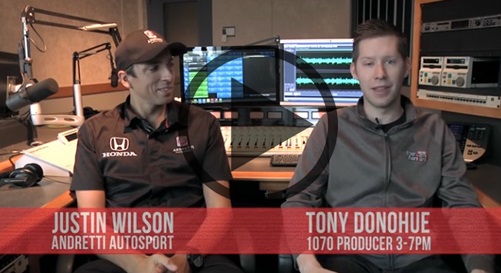 Driver Impressed Those Around 1070, And Non-Profit Sponsor

On the heels of his tragic death of Justin Wilson following an accident at the Pocono Raceway this weekend, Hoosiers have been reading about what a good guy the Indy Car driver was.

Several folks in & around 1070 THE FAN can echo that based on firsthand experience.  He was in our studios this May for interviews, and to record a commercial for a local non-profit he’d lent his name to after overcoming his own reading disorder.

“By spreading the message that ‘dyslexia doesn’t stop me and it shouldn’t stop you either’ he was a hero and role model in the eyes of our students,” said Kaitlin Ferries, Director of Communications at the Dyslexia Institute of Indiana.  “We couldn’t be more thankful for his kindness and generosity.”

In person, Wilson had a physical presence.  Unlike most drivers who are short statured so as to work easily inside the tight quarters of a racecar’s cock pit, at 6’ 4” Justin could look down – literally – on most people in the radio station.

But figuratively speaking, Justin looked down on no one.

“He just seemed like a quality human being,” said Emmett Andrews, radio Production Director for the station who recorded Wilson that day.

Andrews admitted beforehand he was skeptical about the quality & effectiveness of a commercial to be voiced by an athlete who had a reading disorder.

“(Pro athletes already) typically have the literary and verbal skills of a second grader… (and now one) who was dyslexic and (they) expect me to make it sound decent?!

“Turns out, he had absolutely no problem with the copy (script) at all.  He was also far more accommodating than I expected.  He really took ownership of his part and wanted it to be right, where I would have expected most to try to rush to get to their next engagement or interview.  It was clear to me he cared about the cause and respected the process to create it.”

That day in studio, Justin Wilson made affable appearances on-air during The Grady & Big Joe Show and with Greg Rakestraw for Indy500 Qualifying coverage, plus a video with producer and co-host of The Ride with JMV Tony Donohue.

That includes all those at the radio station who dealt with him.