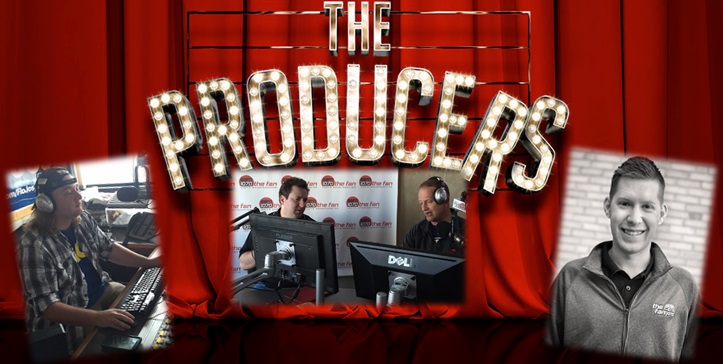 Getting To Know People Who Make Our Advertising Happen – 3 Questions With Kyle Knezevich, Tony Donohue and David Dearing

Today, Radio Indiana introduces you to Kyle Knezevich, Tony Donohue, and David Dearing, Producers for the weekly local programing on 107.5/1070 The Fan.

Their role is pivotal in ensuring the programming that airs to thousands of listeners weekly goes as planned. They all have a similar background when it comes to how they got their start here at Emmis Communications, yet they all have much different passions that help set them apart.

Kyle got his start in the radio industry in our promotions department and quickly took advantage of his opportunity to run the soundboard for multiple shows across our sister stations. He has found a home from Noon-3PM on 107.5/1070 The Fan, weekdays as he produces, “The Dan Dakich Show.”

Tony used his internship as a networking tool and developed a friendship with Michael Grady. Through this work relationship he was given the opportunity to springboard his career by working the soundboard on a weekly basis with Coach Bob Lovell on, “Indiana Sports Talk.” Tony is now the everyday producer for, “The Ride with JMV” which airs Monday-Friday from 3pm-7pm on 107.5/1070 The Fan

David was pointed in the direction of Emmis by his college curriculum. IUPUI has high regard for our company and urge their students to intern here if possible. It was through this course that David got his first glimpse at the radio industry. And it’s a ride he continues to enjoy. He too helps with our weekly content here at 107.5/1070 The Fan by producing the, “Grady and Big Joe Show.”

Combined, they have all had their hand in over 25 shows that have hit the airwaves via our four local stations and Network Indiana, which provides content throughout the state. All three of them also have a very active social media following where they combined to reach over 14,200 people on Twitter alone. As they continue to watch their careers grow, so too does their opportunities to connect with more and more of the stations listeners. As of August 2014, these three have a rotational show that airs on 107.5/1070 The Fan on Saturday’s from 11am-1pm known as, “The Producers.” Also, they can be found on the stations website, 1070thefan.com, blogging about current sporting news.

How often does it hit you that you are in control of a show that so many people listen to?

Kyle: Every day….every day. If you can’t multitask, you can’t be in this industry.

Tony: It is intimidating at times. You know about all of the mistakes you make right away because people will let you know about them. And people don’t forget.

David: Sometimes you worry so much you’d freeze. Fear is the mind killer, as they say. Sometimes you forget that you are on air depending on the flow of conversation, and that can be a good and bad thing.

Since your first days producing the shows, until now, how much more do you contribute to their content?

Kyle: If Dan is going on an x’s and o’s break down of a game from last night…just shut up. If you are talking a little football from last night, or having fun, then it’s good to interact with him. Just a quick chime in, quick chime out.

Tony: When I first started I wasn’t allowed to speak on my mic. With JMV, he has a 4 hour show and that’s a long time for one person to speak. So I’m there to give him a break at times. I met a guy at the Speedway today who said, “You know, I feel like I know you guys (JMV and Tony) more than I do, but I know all these different things about you guys because you both open up about so many topics.”

David: It is one of those things where I have the freedom to join in but I try not to. Grady and Joe have such good playback off each other and I try not to disrupt that. If something is brought up, like NASCAR, that they know I have an opinion on then they will bring me on.

Can you explain how it feels to now have the freedom to co-host your own show together?

Kyle: Co-hosting our own show is incredible.  Number one, it’s something you work for in this business and I’ll be the first to say, we are a work in progress.  But that’s part of learning, no matter the job in life.  So it’s a sense of accomplishment in one way but the beginning of a new step in my career.  You have so many responsibilities as a producer, but when you host/co-host, it doubles.  And so does the prep.  It gives us a chance to be more opinionated and our Saturday show and is a great way for us to become even better producers as well.

Tony: It’s a good feeling to be able to display our talents and co-host. It lets us show our personalities and what we go through behind the scenes. People enjoy hearing the behind the scenes stories because they want to feel like they’re apart of something that most people don’t have access to. It also helps us get better at being on the mic and practicing hosting as well as co-hosting.

David: Having that freedom really makes you appreciate the work that our day-to-day hosts put in to doing a show. These guys make it sound effortless, but there is a great deal of organization that has to go on beforehand. Whether it’s communication with your co-hosts on what you want to talk about, certain talking points, facts, or opinions you want to organize and have ready to go, or questions for guests during interviews, you have to be on your game and prepared, or you’re up a creek without a paddle once those microphones go live. Our hosts do a great job at doing that, and it really shows, because I think they’re the best at what they do.