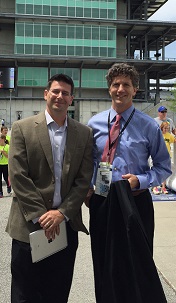 Announcer Talks About What Makes The Speedway and Radio Special

This time of year is one of the craziest for race fans around the state of Indiana, and even the world. The same holds true for Emmis Communications own, Kevin Lee.

Lee has been part of sports broadcasting in Indianapolis for nearly two decades.  Currently, he is a regular field contributor to ESPN 1070/107.5 The Fan’s local sports coverage.  Lee also co-hosts “Trackside”, a talk show dedicated to all things auto racing, which airs weekly on The Fan.