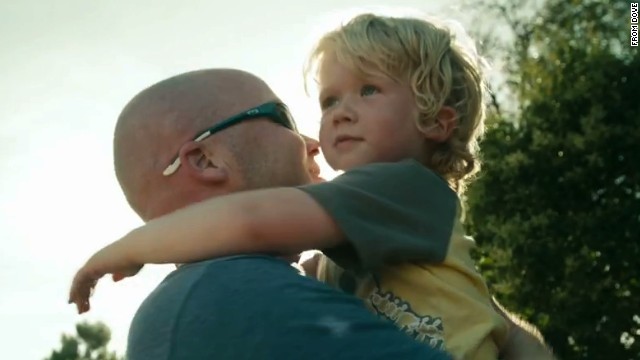 Fatherhood Featured Prominently, And Positively, In Commercials Is Industry Trend – And Smart Business!

Whether because of the big expense sponsors pay for ads in the big game or the variety of creative ad styles, year in and year out the commercials in the NFL championship are guaranteed “water cooler” talk for a week.  (Many times the ads have been more entertaining than the game itself; remember Broncos’ debacle last year vs. the Seahawks?)

But there was an interesting trend in watching Super Bowl XLIX commercials that might have had you thinking the game was being played “Father’s Day” weekend instead of the first Sunday in February.

However a recent Ad Age article points out that the family patriarch is finally getting his due with kind and gentle dads appearing in 2015 campaigns for everything from General Mills’ Cheerios and Hyundai Sonata to Similac.

“Men are doing more shopping, dads in particular,” said Jennifer Bremner, marketing director for Dove Men+Care whose Super Bowl ad focused squarely on the fatherhood aspect of that journey around the #RealStrength hashtag.  “Talking to dads is just smart from a business perspective.”

1)   Households with fathers have something awfully valuable to advertisers: money. The median income for U.S. households headed by single women is $26,000, vs. $84,000 for married couples.

2)   And there’s an uptick in single dads.  After a decline in the percentage of children living with their fathers to only 3.2% a decade ago, the proportion rebounded to 4.1% in 2013.

Consumer Reports also has indicated than in some demographics, 52% of dads surveyed indicate they are the primary grocery shopper in their household.

So it makes sense that advertising evolves to portray dads as a responsible parent & consumer.  Guys appreciate the acknowledgement of who they are and what they do, making them more likely to respond such marketing messages.

Fatherhood is discussed regularly on 1070/107.5 THE FAN and likely an important contributor that has helped it to be Indy’s #1 rated Adult Male radio station.

Local hosts Big Joe Staysniak, Dan Dakich and JMV are dads with kids ranging from preschool to teens to young adults.  Each frequently talk directly or indirectly about fatherhood, and often not in a sports context at all – whether mentioning their children and their activities or discussing important things that matter to dads.

Fathers are important consumers to nurture and attract.  1070/107.5 THE FAN reaches them, and I can help you create a commercial that will attract them to your business.