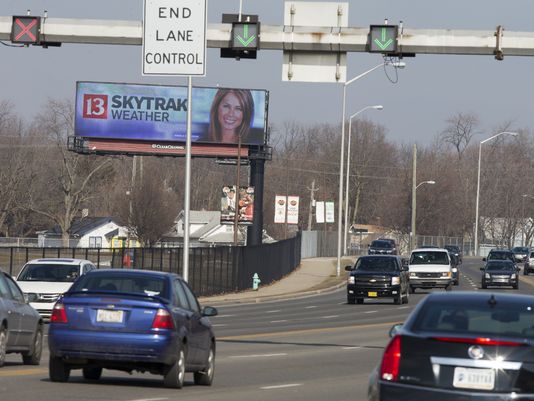 A potential dramatic altering of the local roadway and advertising landscape was put off for at least three months at a recent Indianapolis City-County Council meeting.

A recent proposal to install 71 new colorful digital LED billboards across Marion County on I-465, on expressways outside the I-465 loop and on some city commercial corridors was tabled after 5 & ½ hours of testimony from industry groups and local residents.

While there are an estimated 5,500 digital billboards nationwide, only about 50 currently exist throughout Indiana.  And Marion County effectively shuts them out digital through zoning ordinances that ban “flashing, intermittent or moving light” and “animation” on advertising signs. There are exceptions, including one at the Indiana State Fairgrounds on Fall Creek Parkway because it’s on state property.

These are very different than traditional billboards, and creep closer to other types of media through the use of technology.

Traditional static billboards have long been good for directional use, such as saying “next exit” for a fast food restaurant, or for branding & raising general awareness.   The same message stays up for an entire month at a minimum, is available to be seen by consumers in the area 24 hours a day, and often is delivered in a clean, easy to understand visual message.

Digital electronic billboards offer creative flexibility allowing up-to-the-moment message opportunities that can be changed weekly, daily or hourly from a computer.  This can radically change the way an advertiser uses the medium, allowing for time-sensitive messages more commonly used in broadcast & social media such as one-day promotions or special events.

But digital billboards also rotate different sponsors every 6-8 seconds, so a consumer could miss the ad driving while driving; and there’s a safety concern, too, as studies have shown that the visual stimulation of these high tech billboards often distract drivers to take their eyes off the road more than 2 seconds.  (Texting while driving also takes drivers eyes off the road for a few seconds at a time.)

Then there’s the issue of community clutter.  Residents from around 25 Indy neighborhood organizations are concerned about the brightness and size of the digital billboards, and their proximity to homes.

Opponents also want more of the traditional billboards taken down – there are nearly 1,700 in Marion County – for each electronic one the city permits, what is known as the “swap-out” ratio.  The Indianapolis proposal calls for a one-to-one swap but some other cities have much higher ratios.

Billboard industry officials counter that some communities don’t require swap-outs at all.  And, they argue LED billboards are an improvement over the old “paper” billboards because they can display rotating public service messages such as Amber Alerts, storm warnings or Crime Stoppers appeals.

Council Vice President John Barth stressed that Indy’s billboard ordinances needed to be reviewed, saying that abandoned signs contribute to blight around the city.  He and other Council leaders questioned whether the industry-backed proposal — which has so far avoided usual city planning procedures — is the best approach.

The City-County Council voted to table the proposal until April.