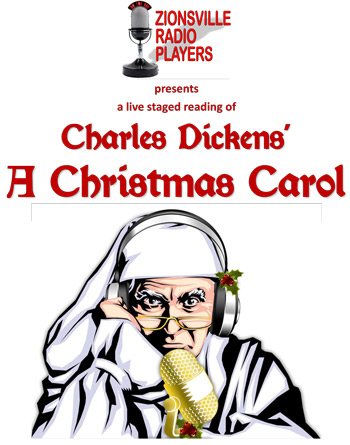 Having Fun In A Radio Production Of Dickens’ Holiday Classic

My job now in radio is selling advertising. But for the second consecutive Holiday Season, I’ve had fun being on-the-air as a cast member for the Zionsville Radio Players production of Charles Dickens’ iconic novel A Christmas Carol.

Our program airs on WITT-Zionsville. And this past weekend also we performed a live staged reading of it in front of a community audience. I voice two characters: the young Ebenezer Scrooge (a cameo role midway through the show) and nephew Fred (a prominent role interspersed throughout).

For some, this might be surprising. Not so for those who’ve known me a long time. Many years ago, I was on the radio a lot.

Be forewarned – this is an old-school 1-hour radio drama; a throw back from an era before TV, let alone YouTube. If you try to consume this show in short bursts the same way you usually do radio, or most any media, today you’ll be underwhelmed.

Instead, treat this more as you would an audio book-on-tape/CD/download; when you can listen in long stretches, like in your car or while sitting undistracted in your living room. If you give our production of A Christmas Carol that space and attention, you’ll appreciate the wonderful words (written by Dickens), the inflection in them, as well as the pacing and emotion in the actors’ voices, and the audio special effects. These are the things that make radio a fabulously effective, intimate medium – no matter whether it’s a 60-minute program or a 60-second commercial! You’ll experience – as the industry cliché says – “theatre of the mind.”

So have fun listening to our version of A Christmas Carol and best wishes to you & yours for a warm, happy Holiday Season!