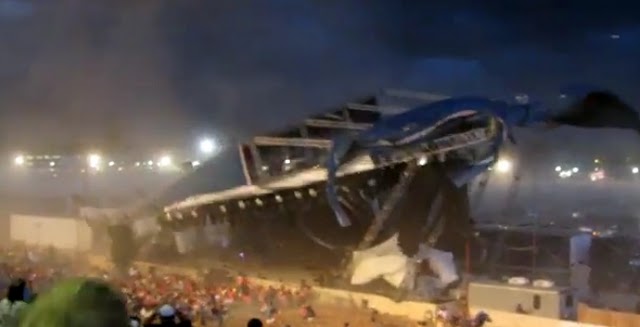 Yesterday marked the one year anniversary of the tragedy of the Sugarland concert’s stage collapse at the Indiana State Fair.

While one of the lowest moments for Hoosier in recent years, WIBC demonstrated itself as a leader on the fateful evening of August 13th, 2011 embodying exceptional communication ability with unparalleled insight, rapid speed and concern for all.

The long time friendly voice of Indiana was the first media outlet to communicate the tragedy during the Sugarland concert at the Indiana State Fair, beating local TV stations & websites by at least a half hour.

First report of breaking news at the Indiana State Fairgrounds.

Being first, while important, only counts for so much.  News delivery has to be accurate and it should not jump to conclusions or be accusatory.  That evening and in the days that followed, WIBC was the ultimate broadcast professional in its approach.

93.1FM’s weekday morning host has for over a decade been Indy’s trusted go-to voice in times of serious situations like the attacks of 9-11 and severe weather storms.  Within minutes of the stage scaffolding collapse, he was on the air live.  Yes, radio is an immediate medium; but Steve’s ability to so quickly move from enjoying a personal, recreational Saturday evening to being behind the microphone was amazing.  Clark Kent doesn’t get his cape on as fast as Steve gets on the air!

But as noted prior, being first is one thing.  Being a pro is another.  Steve Simpson is the consummate emergency broadcast anchor, getting you important information you need but without panic in him.  He puts listeners on alert but does not scare them.

Simpson was not alone in WIBC’s coverage that night.  Several reporters were quickly dispatched to provide insights from various sources, but the first eye witness updates on the scene came from an unlikely source: Emmis Market Manager Charlie Morgan who was attending the show.  While many years removed from his days as a popular Indianapolis country music disc jockey, he showed no rust as an announcer in the face of this crisis.  His poise and insights were invaluable in this situation, as was WIBC as a whole.

What happened at the State Fair that night was incomprehensible.  The pall from this tragedy lingered for a long time.