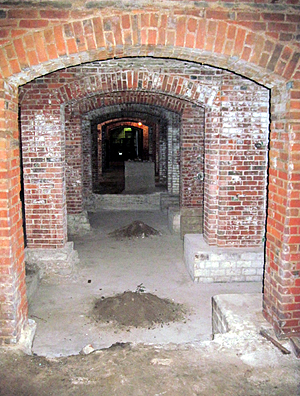 In a previous post, we explored some of the interesting pieces of Indiana history residing in – and under – the topsoil in Indianapolis.  Today, we’re looking at a central hub for food and commerce that’s been around since the early 1800s.  A downtown institution for nearly two centuries, City Market holds interesting and mysterious reminders of our city’s past.

And of course, some of it is underground.

The corner of Market and Delaware has served as Indianapolis’s central market in some capacity since Alexander Ralston’s original plans in 1821.  The current red brick structure, initially known as the Markethouse, was built in 1886, adjacent to 1885’s Tomlinson Hall.

Though the original Tomlinson Hall burned in 1958 (it is now Whistler Plaza, the outdoor space featuring the one remaining archway of Tomlinson Hall), the expansive catacombs beneath it were spared.  The perfectly constructed brick archways, the limestone columns: these all remain.  What does not remain, however, is an answer.  Why are they here?

“Was it built just to support Tomlinson Hall?  Would (the building) have worked without that additional support?  It’s a mystery,” said City Market executive director Stevi Stoesz in an interview with the Indianapolis Star.  “We don’t know what its additional purpose was.”

The 20,000 square foot expanse is said to have housed homeless residents during sub-zero nights in the early 20th century.  It’s reportedly been used as a firing range for the Indianapolis police.  It’s been storage for market vendors.  Fittingly, a haunted house was set up one Halloween in the 1990s.  But now, the dank, dark space awaits its newest use: tourism.