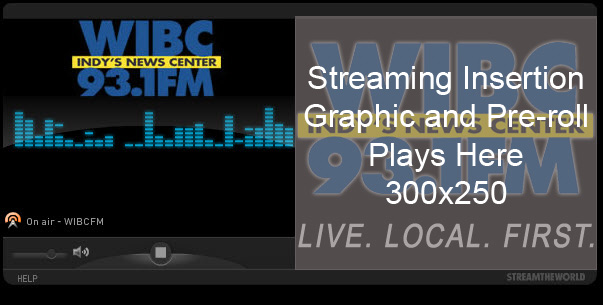 WIBC.com streaming accounts for an average of 254,000 total listening hours each month! And on average, those listening are doing so for OVER an hour at a time!

The amount of Americans 12+ that stream has had double digit growth that last 4 years. This number has grown from 33 million to 42 million. (Source:Infinite Dial 2009) The B1057, 97.1HANKFM, 1070TheFan and WIBC internet streams are simulcast over multiple audio outlets. All stream inventory will now be broadcast to anyone who streams via :

Everything on-air is simulcast on wibc.com’s stream audio player, accessible from each page of wibc.com. Terrestrial commercial inventory is blocked. The WIBC Stream is available as an annual deal or as on a weekly basis. The WIBC stream is accessed an average of 200,000 times each month (three month average).

We give our audience access to exclusive interviews and great content through podcasting. Become a sponsor and brand yourself as the company providing our users with the content they want when they want it!