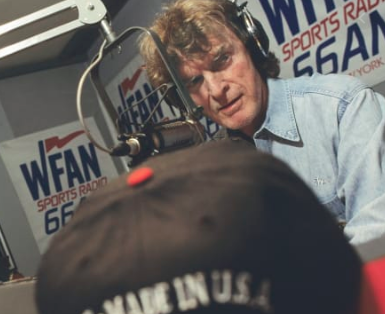 Legendary and controversial broadcaster died December 27th.  Below are excerpts from a report the following day by Newsday’s Neil Best.

(Emmis Communications’) WFAN-New York had launched in July 1987 as the first 24-hour sports talk station, but its initial plan floundered when it focused on national personalities rather than local ones. It also suffered from an inferior signal at 1050-AM.

In October 1988, the station took over WNBC’s more reliable signal at 660-AM and inherited the “Imus in the Morning” program from WNBC’s lineup.

“He saved the radio station; I don’t care what anybody says,” former “Mike and the Mad Dog” co-host Chris Russo said on the station on Friday, the day Imus died at age 79. “Without him, we were in big trouble.”

Joel Hollander, a sales executive at WFAN at the time, recalled on the air on Friday his first meeting with Imus, who said to him,   ” ‘How do you feel, [expletive]? I just doubled your revenue.’ And you know what, he was right.”

But Imus did much more than bring money, visibility and morning drive time stability to WFAN. For a guy who was a casual sports fan at best, he played a pivotal role in developing the station’s sports sensibility.

That included featuring sports news contributors such as Mike Francesa, Russo, Mike Breen, Sid Rosenberg and Chris Carlin, as well as his support of Francesa and Russo as an afternoon show to bookend his show starting in September 1989.

He famously dubbed the pair “Fatso and Fruit Loops” and is credited by both with boosting their radio careers.

Francesa said he learned more about radio from Imus than from anyone else. He recalled noon-time conversations with him between their shows in Imus’ office in WFAN’s original Astoria studios.

“When I think back to the days and the many years we spent together, it was a very special time,” Francesa said. “We built something that will last a very long time.”

Don Imus first came to attention as an early “shock jock,” but he was 20 years into his career when he joined WFAN and reinvented himself as a tamer figure, with interests in politics and (to an extent) sports.

“I really felt like the golden years [of his career] were here,” Mark Chernoff, a top executive at WFAN since 1993, said on the air on Friday. “Imus put this station truly on the map and was the springboard for the success that came afterward.”

WFAN people uniformly praised Imus for his charitable endeavors, including the Tomorrows Children’s Fund, the CJ Foundation for SIDS and his own Imus Ranch.

But it also was on WFAN that his career took its worst turn, when he was fired after making a racist and sexist remark aimed at the Rutgers women’s basketball team in 2007.

Rosenberg was his sports update man that day.

“He will always be remembered as controversial, but I also saw the charitable and funny side often during our 18 years together,” Rosenberg told Newsday. “Truly a legend and a pioneer. His talents will be missed.”

Said Francesa, “Don Imus’ legacy will live as long as FAN lives, and as long as radio lives.”

Emmis sold WFAN in 1992 to Infinity Broadcasting for $70M, which was one of the highest prices ever paid for an AM radio station, and now owns & operates 24-hour sports WFNI-Indianapolis.