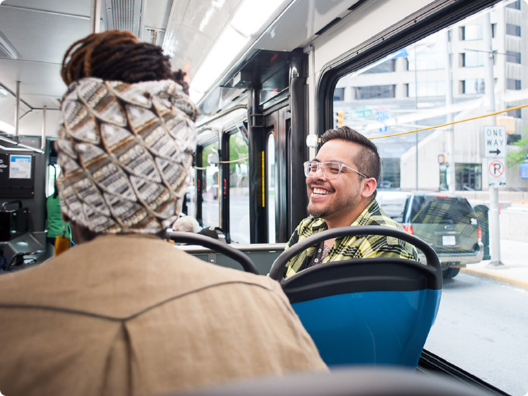 Indy’s transit ecosystem has changed considerably in the last year or so.

And after a long wait, is IndyGo’s Red Line is now in its second month and ironing out kinks.

If you’d been anywhere along the 13-mile route prior to its opening, you’ve probably noticed the construction.  But, officials say that temporary pain is more than worth it.  Phase 1 of the project runs from the northside near Meridian Hills and Broad Ripple to the University of Indianapolis on the city’s south side.  Along the way it makes several stops downtown and throughout the city.

Riders notice this isn’t like their typical city bus experience.  It’s a rapid transit bus which stops only at dedicated raised stations.  WiFi is available on all buses and all stations.  Additionally, the buses themselves only run in easily recognizable lanes that are aptly painted red.  The stations themselves are strategically located and offer plenty of resources for folks who wish to ride their bikes or walk.  These buses are also much longer than traditional buses which accommodate more riders.

The Red Line is the first in a larger plan for IndyGo to modernize and expand the city’s public transportation options.  Lines will eventually cris-cross the city and allow for easy access to the airport and a number of downtown neighborhoods.

The Red Line has buses arriving at stations every 10-20 minutes and operates until 1:00 am on Monday through Saturday and 10:00pm Sundays.

IndyGo will install a new ticketing system for The Red Line called MyKey with reloadable fare cards, a mobile app ticket vending machines at stations November 10th… but until then, riding is free!

So far, Indy has been embracing the buses.  The first few weeks have proven to be successful as many buses are filled—especially during busy rush hours.  Riders appear to be enjoying the service and IndyGo says there are plans to expand the bus rapid transit service to other routes soon.