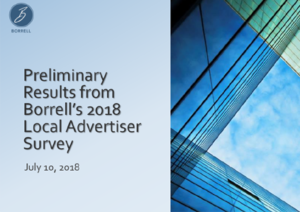 What sort of shifts in small to medium-sized businesses’ marketing habits are taking place across the U.S.?

Early results from Borrell Associates‘ 2018 survey of local advertisers are in, and Gordon Borrell says he’s picked up on a shift since 2017 in how SMBs are buying media.

Here’s a glimpse of what Borrell’s team finds.

“It’s not surprising that most local advertisers use a combination of digital and non-digital media in their campaigns,” says Borrell in reviewing new data that confirms traditional media is not bought alone anymore.

What is surprising to Borrell is the 12-month decline of 81% in the use of traditional media by itself, and a corresponding 21% increase in the use of both.

Asked which of the following types of advertising respondents bought last year, small and medium-sized business owners replied as follows:

“Once anything moves into the 90%+ realm, it is considered ubiquitous,” Borrell says. “It’s no longer an either-or choice. In other words, one isn’t going to replace the other.”

The findings are tied to a larger look at preliminary results from Borrell’s Local Advertiser Survey, available for purchase. It offers a detailed look at how SMBs like “professional, short video ads”; and how more SMBs are buying Facebook advertisements.

Also being shown in detail is how the biggest budgets go to television and for search marketing.