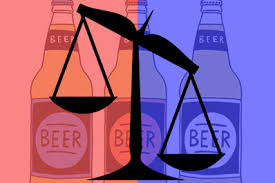 Hoosiers Known For Restricting Sunday Sales, But Law’s Origins Probably Not What You Think.

Indiana may finally be on its way to nixing its ban on Sunday alcohol sales.

There are still several legislative hurdles to clear, but for an issue that has arisen every year, proponents are more optimistic than ever.

Prior to the Holidays, a panel tasked with reviewing Indiana’s state alcohol regulations voted to recommend allowing carryout alcohol sales on Sundays. The decision comes after a change in tone from previous opponents of Sunday sales, as well as an “unlikely alliance” between big-box stores and the state’s small liquor store organization.

What are the current laws?

Clear as mud? Retailers hear you.

Alcoholic beverages can legally be purchased between 7 a.m. and 3 a.m. Monday through Saturday.

Currently, Indiana is one of just twelve states which bans liquor sales on Sundays. Plus, Indiana is the only state in the country that bans carryout beer, wine, and liquor on Sundays except if it’s sold directly from a brewery or winery.

Additionally, Indiana is the only state that regulates alcohol based on temperature; chilled beer and wine is not allowed to be sold in grocery and convenience stores. But liquor stores, where you can buy cold beer, prohibits the sale of snacks (no beer nuts) and groceries (like milk for your White Russian).

Why has it been this way?

First, let’s go way back. A “blue law” in the United States is considered any law forbidding certain secular activities on Sunday. The first blue law in America was enacted in the colony of Virginia in the early 1600s, and required attendance at church on the Sabbath. It’s generally thought that the name “blue law” was derived from Samuel A. Peter’s General History of Connecticut (1781), which listed Sabbath regulations for New Haven, Connecticut. The work was printed on blue paper.

In Indiana, from before it was a state and throughout the 1800s, there were several movements toward the prohibition of alcohol all together, and many counties stayed dry throughout this period. In 1918, Indiana became the 25th state to go completely dry as a part of the temperance movement. Contrary to popular belief, religion and temperance weren’t the driving force behind Indiana’s current laws. “Alcohol is one of those businesses that very typically have been handled by a small proprietor,” Georgia Tech Economics Professor David Laband says. “And they’re no different than the other small operators. They don’t want to be open seven days a week. They’d like to have one day a week when they could get a little time off.”

However, with a former proponent of blue laws now on board with Sunday sales — the Indiana Association of Beverage Retailers recently called the laws “antiquated” —  the last remaining reason may no longer stand.

Think Indiana’s bad? Other states have their own quirks.