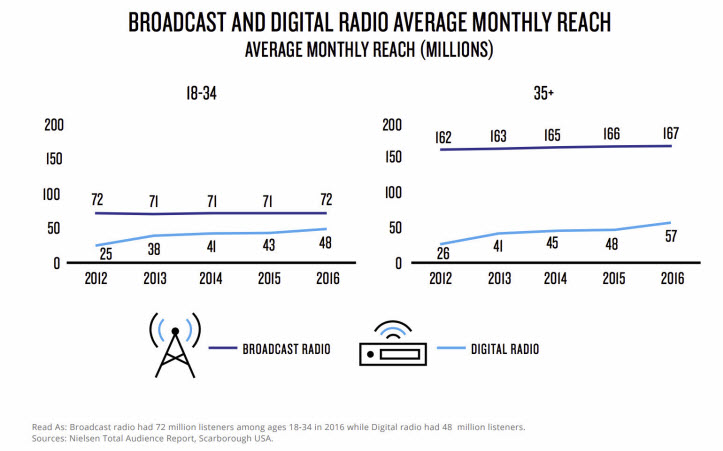 Podcasts, Pure-Play Streaming And Other Digital Music Forms Increase Audio Consumption, And Not At Radio’s Expense.

The following was by Inside Radio last week.

According to Nielsen’s Q1 2017 Total Audience Report, the reach of digital radio has increased among both Millennials and consumers 35+ since 2012, but the weekly reach of AM/FM among Millennials remains 93%.

That is among the valuable talking points in Nielsen’s newly released report “Millennials on Millennials: Digital Music and Digital Communication.” Its missive is to help brands and marketers better understand the “differentiated behaviors of this extensive and impactful generation, whose influence is steadily growing.”

Nielsen points out that Millennials—now the second-largest generation in the U.S.—have disposable incomes that “are starting to wield their spending prowess—and that prowess often begins with digital engagement,” particularly on mobile devices.

“In many ways, Millennials’ digital engagement is the jumping-off point for many of their consumer behaviors,” Nielsen says in the report. “In turn, each digital channel represents a key engagement point for brands, marketers and advertisers.” A glance at “engagement” stats shows Millennials are spending about the same amount of time listening to traditional radio as they were a year ago—even with a wealth of new media fighting for engagement time. In an average week, according to the fourth-quarter Nielsen Total Audience report, 18-24-year-olds spend 10 hours, 14 minutes each week listening to the radio, which is about an hour less than 25-34-year-olds do (11:17).

At the same time, Nielsen’s 2016 Year-End Music report noted that total audio streams spiked 76.4% last year, as Americans listened to almost 252 total streams. Much of that comes from Millennials, as almost 60% say they use two or more apps to stream music, compared with just under 40% of consumers 35 and older. Consumers 35 and older are also more likely than Millennials to remain loyal to a single app or streaming service. Podcasts make up another significant opportunity for marketers to engage with young Americans, Nielsen notes, as 37% of Millennials report listening to podcasts at least once each week. In addition, 13% say they listen every day, which is significantly higher than the 5% of consumers 35 and older who listen daily.

Nielsen concludes amid the stats that “the reality of today’s media scenario is that the addition of new offerings has actually inspired increased consumption.” According to its Q1 2017 Comparable Metrics Report, radio reaches more people 18-34 than any other medium. “The data speaks to the immense connection young consumers have with media in general, and their desire to increase their consumption of quality content rather than forcing themselves to reduce consumption across one medium to feed a need with another.”