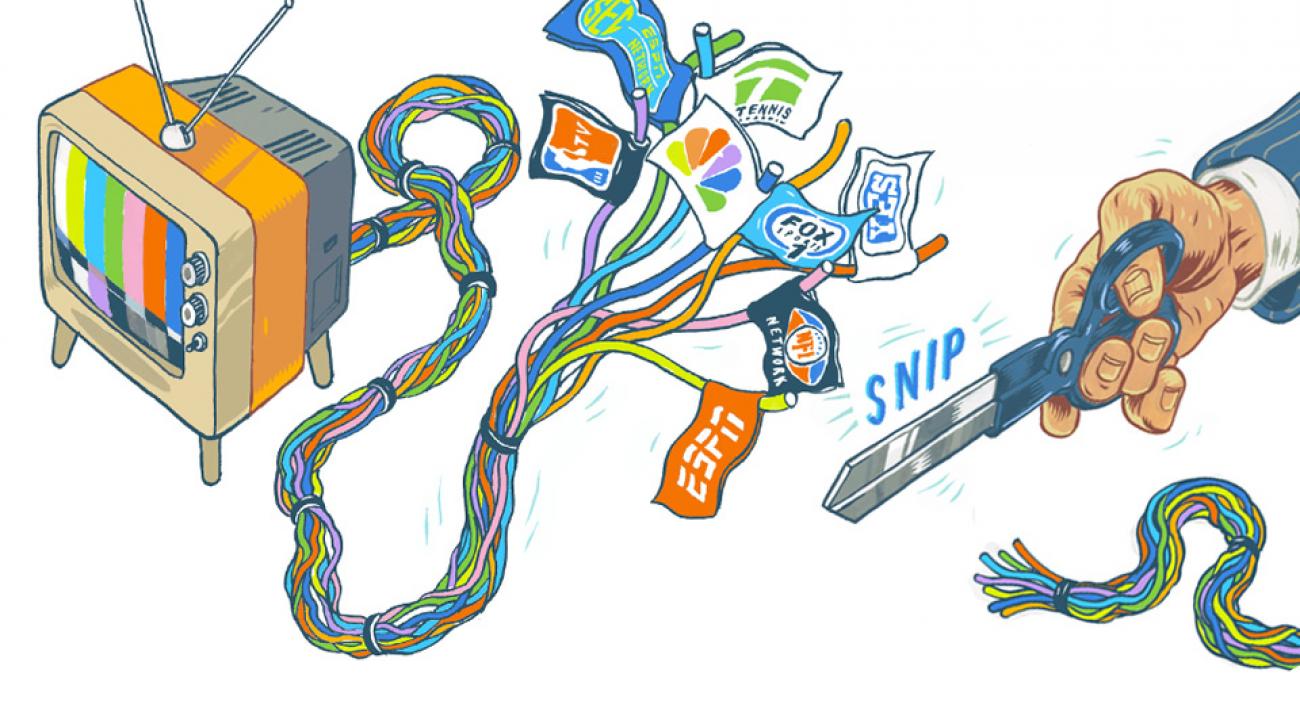 Below are excerpts from a Sports Illustrated profile by L. Jon Wertheim.

Unlike most of commerce today—we purchase individual songs rather than entire albums; we customize everything from cars to phone cases to basketball shoes—cable comes to us as one robust, unbreakable whole.

You can’t spell inextricable without c-a-b-l-e.

For years sports have been an essential ingredient in the cable-driven model, providing “appointment television,” the rare fare that is all-but-DVR-proof. “The power of sports is the leading reason the bundle exists today and [why] the bundle is as big as it is,” says Rich Greenfield, media and tech analyst at BTIG in New York City. “Sports support the whole business.”

However, a growing number of subscribers are cutting the cord and replacing cable with broadband.

Networks such as HBO and CBS are going straight to the consumer with content that can be streamed on mobile devices.

Inevitably a day will come—perhaps soon—when we will consume media à la carte, picking and choosing and paying for only the programming we desire.

How will the new, unbundled model affect this synergy? Here’s what the sports viewing landscape could look like in the future:

What happens to ESPN?

Today, cable viewers pay about four times as much for ESPN as for any other non-premium channel, roughly $6 per month, thanks to the network’s near monopoly position. With a few minor exceptions—the NHL, the Olympics, English Premier League—ESPN has a deal with every major sports league. Sports fans want this programming.

Just under 100 million cable homes get ESPN in their cable package; how many consumers would voluntarily pay for ESPN?

Calculating ESPN’s subscription price in an unbundled scenario goes beyond simple math. Scalar Media Partners, a Manhattan consulting firm, estimates that the price would be $30 a month.

Who would pay $30 a month for ESPN? According to Nielsen research, the average household consistently watches only 17 of the 189 channels it receives. Consider how many of them you, the sports-minded consumer, would gladly give up to offset the ESPN fee increase, and $30 a month becomes much more palatable, no? Who loses if channels are unbundled?

Regional sports networks (RSNs), for one, which charge between $2 and $3 a month. Ratings suggest that only a very small percentage of subscribers would pay that voluntarily.

There’s very little other live programming to fill the thousands of hours when the (MLB’s Colorado) Rockies are idle; and that, in an unbundled world, fans will have the option to start their subscriptions before the baseball season, then cancel them right after. Is such an enterprise viable?

Likewise, it will be interesting to see how the unbundling of cable will affect -college-conference- networks—and, in turn, college sports.

Based on ratings, only a small fraction of cable subscribers would pay to order the network. If conference networks can no longer rely on bundling, they will struggle to replace that piece of the revenue pie, which will have a huge impact on athletic department budgets.

What about network television?

In an age of unbundling, the business model of networks will be less disrupted than that of their cable counterparts; they’re less dependent on cash for carriage, and they offer a wide variety of programming that appeals to a wide variety of viewers. Plus, as CBS has already started doing, networks can recoup viewers (and revenue) by offering Over the Top (OTT) subscription video services, available on mobile devices and tablets.

As it stands, sports can be a loss leader for network television. Rights fees and production costs are high, but games enable networks to gain a mass audience that leads in to other shows (think of the Sunday NFL audience that sticks around for 60 Minutes) and a chance to integrate promotional opportunities (e.g., the promos for fall shows displayed between downs in football or pitches in baseball).

Why don’t the leagues and other content holders emulate HBO Go and market directly to consumers?

For one, given the premium that networks pay for live programming, it’s unclear whether leagues would fare better financially under a content-streaming model: They would be selling only to their fans, and at higher prices. It’s also much easier to develop the next generation of followers when your programming is available to everyone; that’s one reason that the fan base of the NFL, which has mostly stayed on broadcast television, has continued to grow.

Where does net neutrality figure into this?

Net neutrality is the principle that no one should have better Internet access than anyone else. This means that established companies shouldn’t be able to charge a premium for superior speed.

While this sounds fair and equitable, it can be problematic. If ISPs can’t charge for upgraded service, they have little incentive to innovate and broaden bandwidth. Right now, bandwidth is sufficient to watch Netflix movies or our favorite shows on demand. But can millions of people simultaneously stream the same NFL game? If not—and if net neutrality prevents the improvement of Internet architecture—a discussion of mass streaming of mainstream sports may be a moot point.