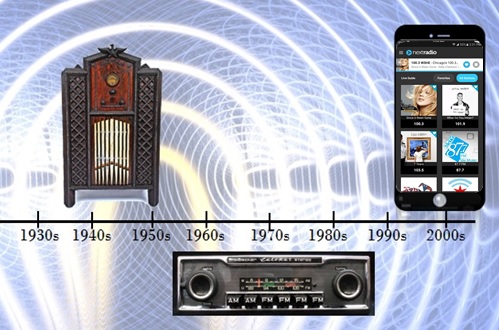 Focus Has Shifted From Furniture-like Console, To The Car, To Mobile Phones.

Sixty years ago the curtain was falling on radio.

In living rooms across the country the soft glow of the AM dial was being replaced with flickering images from a TV screen.  Radio should have died right then and there, but it didn’t.  It found a new vehicle (the vehicle, the automobile) and new relevancy, and reinvented itself.

It’s happening again.  As the flickering glow of PC and TV screens are replaced by the soft glow of mobile devices, oddly enough, radio is there.

Don’t believe me?  Consider this: “Radio” is the second-most-common activity on smartphones, behind social media usage, according to comScore.

It is, of course, more aptly described as “listening.” But the radio industry is seizing on this opportunity just as they did on a different “mobile” opportunity with car radios six decades ago.

They are also pursuing something that could blow the lid off radio’s pent-up desire to remain relevant in today’s uber-fragmented media world: activation of FM chips in smartphones.  Imagine 73 percent of adults carrying around transistor radios.  Imagine the reduction in streaming-data usage. Like the 1950s, radio’s big opportunity is again in a different distribution platform.  Drive-time listening is diminishing due to car dashboards become more sophisticated, obscuring radio dials.  But dashboard plug-ins for smartphones might just offer the best opportunity for radio to deliver an encore a half-century later.

These are excerpts from a piece originally published last year as one in a number of stories on radio in Media Life’s ongoing series “The new face of radio in America.”  Click here  for full read.