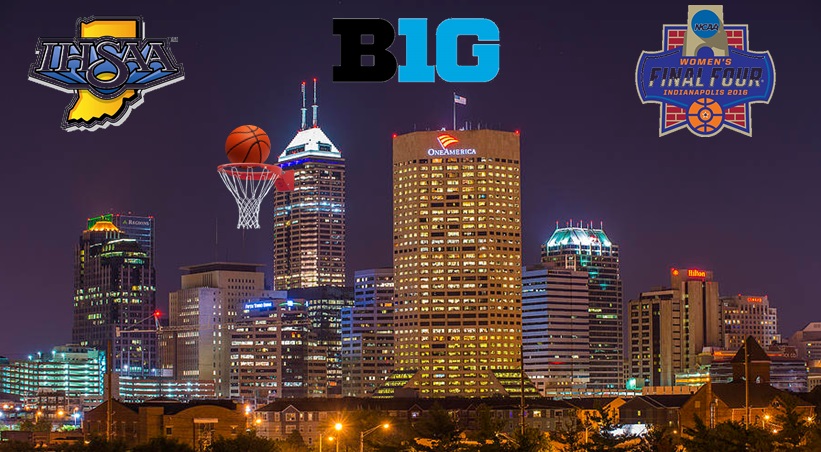 March is finally here, the biggest month for basketball fans everywhere. And once again, Indianapolis will be the center of attention for much of the month, with high school and college basketball reaching its final stages.  Bankers Life Fieldhouse will be hosting an exceptional amount of basketball in the coming month.  Here’s what’s going on in and around the city, hoops-wise, in March.

The 106th IHSAA Annual State Tournament tips off this week.  Sectionals begin March 1st at various host schools throughout the state, with the state tournament lasting the entire month. Noblesville, Arsenal Tech, Southport, New Palestine, Beech Grove, Broad Ripple, Bethesda Christian, and Edinburgh are all sectional hosts this week. The state finals are March 26th at Bankers Life Fieldhouse, and will be broadcast on 107.5 THE FAN.  (Note: the 41st Annual Girls Basketball Tournament finished this weekend.)

Bankers Life Fieldhouse once again hosts the Big Ten Men’s Basketball Tournament, March 9-13.  This is the 10th time in 18 years that the Big Ten tournament has called Indianapolis home. With the Indiana Hoosiers currently atop the Big Ten standings and both IU and Purdue ranked in the Top 25, local interest is quite high this year.  See Indiana Sports Corp’s list of ancillary events, including pep rallies and parties around the stadium.

With Ohio State, Maryland, and Michigan State all in the top 25 of the national rankings, Indy fans have a unique opportunity to possibly see a conference championship and a national championship won by the same team on the same floor.

As with any Final Four, so much of the excitement is contained in the activities surrounding the game! Tourney Town at the Indiana Convention Center is free and open to the public, April 1 through 3, and includes kids’ clinics, mascot challenge, autograph sessions, and music throughout, featuring a performance by Salt-N-Pepa.

No event is complete without a 5K run, right? The 4Kay Run on April 2nd, named in honor of the late NC State and US Olympics coach Kay Yow, will benefit her namesake Kay Yow Cancer Fund to provide research and education nationwide.

Can’t get enough hoops? In addition to the main events, the Division II and Division III championships will be played in Indy on April 4th, providing fans a unique look at all levels of NCAA competition. This is the first time all NCAA division women’s basketball champions will be crowned in the same city.

OVERTIME: If you still can’t get enough NCAA sports in Indy, don’t forget that we host the NCAA Swimming and Diving Championships, March 8-12 at the IU Natatorium.