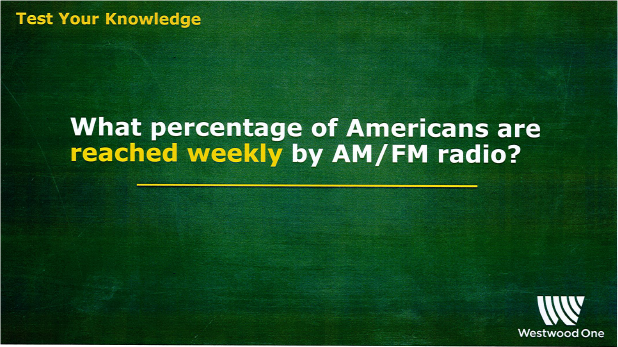 Perception vs. Reality, The Gap Is Wide

Perception: Agencies and advertisers think 64% of Americans are reached by AM/FM radio, according to an Advertiser Perceptions study conducted in May 2015.

Reality: According to Nielsen, 93% of Americans are reached by AM/FM radio. (Total Audience Report, Q1 2015) Lew Dickey, former CEO of Cumulus and Westwood One concluded: “Advertisers and agencies drastically underestimate the reach of AM/FM radio.  This study is the first conclusive evidence of the major gap in actual and imagined performance of AM/FM and streaming outlets.”

Bob Pittman, Chairman and CEO of iHeartMedia Inc., said: “The most recent Nielsen Total Audience Report showed that radio is now the number one reach medium, surpassing TV with total audience and Millennials by an even greater margin.  This research makes it clear that while TV and new forms of media may get more attention, they don’t come near the reach of radio; radio is truly the mass reach mobile media.”

Perception: Advertisers and agencies think the audience share of AM/FM radio is nearly the same as streaming, according to Advertiser Perceptions. Perception: Advertisers and agencies think Pandora and Spotify reach 27% and 20% of Americans respectively, according to Advertiser Perceptions.

Click here to see the highlights of the Perception vs. Reality study.

Authored by Pierre Bouvard, CMO of Cumulus Media | Westwood One