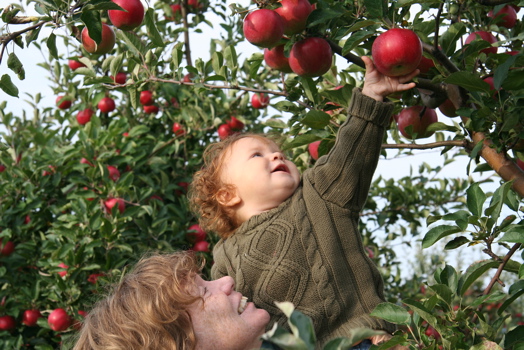 While life in the Circle City can occasionally seem removed from Indiana’s farming roots, a visit to one of central Indiana’s many farms and farmstands is a great way to revel in the bounty of the Midwest!  All these places are a short drive from downtown Indianapolis, easily reachable in an afternoon.  (Just be sure to avoid the I-65 split downtown on your way out.)

Indiana and the Midwest provide a bountiful apple harvest.  Here are a few places to fill a bag or bushel and enjoy an early fall day outdoors in an orchard:

Tuttle Orchards – Greenfield, IN (also has a pumpkin patch, hay rides and other activities)

Smith Farms – Frankfort, IN (also has pumpkins, peaches while in season)

The pumpkin harvest starts in late September, and Halloween is around the corner.  A trip to a pumpkin patch – many of which have other activities like hayrides, orchards, and games – is a time-honored fall tradition. Here are some local pumpkin patches: Spencer Farms – Noblesville, IN (also has you-pick raspberries through the end of the season, a farm stand, hay rides, and other activities)

Tuttle Orchards – Greenfield, IN (also has an apple orchard, hay rides and other activities)

It’s not just edible produce that abounds at the end of the season in Indiana – famous Indiana mums, hardy and colorful, are in season right now, as are full-grown sunflowers.  Pick up some plants for your home or some garden mums for your back yard (many can withstand the winter and flourish the next year!)

Spencer Farms – Noblesville, IN (also has you-pick raspberries through the end of the season, pumpkins in late September, and other activities)

Carter’s Strawberries and Mums – Frankfort, IN

Tuttle Orchards – Greenfield, IN (sunflower field, also has a pumpkin patch, hay rides and other activities)