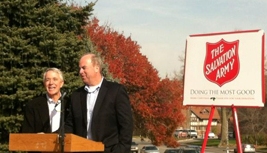 Time for Joy, Giving, and Hard Work for Salvation Army, Others

As recognizable as the lights on Monument Circle, the Salvation Army’s red kettles are a holiday tradition, but of a different sort.  A small – but noticeable – part of the Tree of Lights campaign, the famous red kettles and bell ringers seek to raise a portion of the lofty $3.3 million goal between now and January 31st.  The Angel Tree Toy Drive provided toys to over 2,000 children last year and is shooting for a similar goal.  93.1 WIBC teams up with the Salvation Army for its annual Radiothon – a three-day on-air campaign to raise funds directly for the “bed & bread club” to fight hunger and homelessness in Central Indiana.  Last year, WIBC and the Salvation Army raised over $1,668,000 through individual and corporate donations – and to meet the overall $3.3 million goal for 2012, hope to raise even more.  Pat Sullivan and Denny Smith will serve as co-chairs for this year’s Radiothon between December 7th and December 9th.

Continuing with making Christmastime a joyous occasion for Indianapolis’ disadvantaged youth is another recognizable tradition: the Marine Corps Toys For Tots campaign.  All toys collected by local Marines are distributed to needy children in Indianapolis. Follow the Toys for Tots Foundation for a list of local toy dropoff sites in and around Indianapolis.

So while you’re downtown checking out the Circle of Lights display or out shopping at a major shopping center, the streets of Mass Ave, or Broad Ripple, give a nod, some holiday cheer, and maybe a little cash to the bell ringers and their musical reminder of helping Indianapolis residents in need this holiday season.