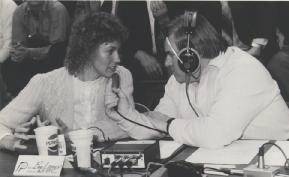 For 25 Years He’s Been Voice Of The Colts, And Much More In A Storied Career

That hasn’t always been the case.  Hockey.  Auto Racing.  Pro Basketball.  High School championships.  Lamey broadcasted all of these sports extensively at various stops along his career, including over two decades as the Sports Director of then WIBC-1070AM, before getting his shot with the NFL.

Interesting topics that came out in his discussion with Radio Indiana, include:

Hear him details of these, and more, in entire podcast with the Voice of the Colts.