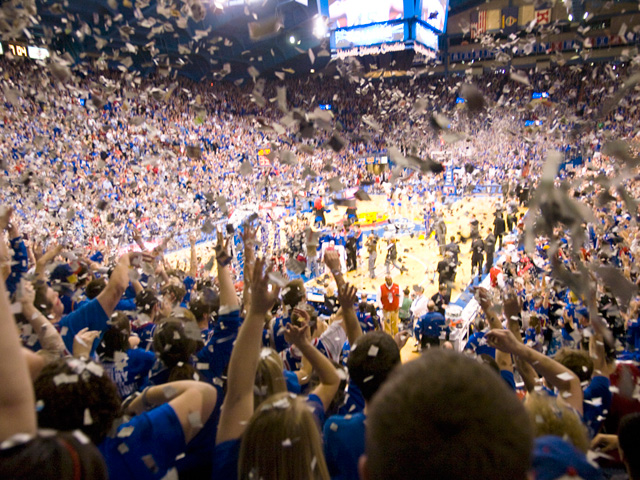 “Basketball really had its beginning in Indiana, which remains today in the center of the sport.” — Dr. James Naismith, 1936, inventor of the game.

“In 49 states, it’s just basketball…This is Indiana.”  So goes the motto of the Indiana Basketball Hall of Fame.  And right now, Hoosiers across Indiana are proving that as communities turn their collective heads towards the culmination of the 2011-2012 basketball season.  It’s an event that’s defined our state, from Oscar Robertson’s barrier-breaking Crispus Attucks team, today’s hometown rising superstars like Gary Harris, to the “Milan Miracle,” immortalized by Gene Hackman and the cast of Hoosiers.  As the Indiana High School Athletic Association (IHSAA) says, Hoosier Hysteria is “Pure Indiana.”

At the same time, sectional champions were crowned for the 102nd IHSAA Boys Basketball State Tournament at sites throughout the state.  (Aforementioned star Gary Harris’ Hamilton Southeastern team — following their dramatic win in the sectional opener versus North Central — was ousted from the tourney in upset fashion by Carmel.)  Regional action begins this weekend, semi-states the next weekend, all culminating in the main event, the state finals, on Saturday, March 24th from Banker’s Life Fieldhouse in downtown Indianapolis.

On ESPN 1070 The Fan, tune in for championship broadcasts as well as news and scores from Coach Bob Lovell, the definitive source for Indiana high school sports and host of Indiana Sports Talk (Friday & Saturday 9:30-midnight).