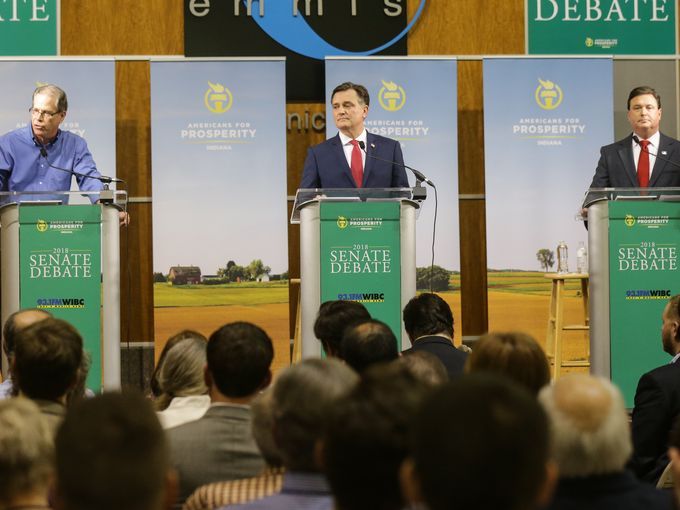 Event Was Classic Political Theater – Attacks, Protestors, Insightful Q & A From The Podium

Below are excerpts from report last week by IndyStar’s Robert King.

After months of sniping from afar, the three Republicans vying for Indiana’s U.S. Senate seat squared off Tuesday night in a 90-minute debate that featured plenty of appreciation for President Donald Trump, plenty of barbs for (Joe) Donnelly, the Democrat they want to replace, and some testy exchanges on stage.

(Todd) Rokita, a four-term congressman and former Indiana secretary of state, opened by welcoming (Mike) Braun to the Republican Party — a dig at his record of voting for years in Democratic primaries — and welcoming (Luke) Messer back to Indiana, a nod to his criticism that Messer spends too much time out of Indiana.

Braun, a millionaire businessman who spent a short time in the Indiana legislature, was hit with a number of broadside attacks from Rokita, who accused him of shipping parts built in Mexico and China with his trucking company.

Braun tried to brush aside the barbs, calling them political double speak and touting his real-world experience as a job creator. Braun said American companies use his shipping lines and that his tax votes in the legislature were for desperately-needed road improvements. He vowed not to raise federal taxes.

As a visual aide to his outsider status, Braun showed up without coat and tie and a blue open-collared shirt. The two congressmen appeared in full debate uniform – dark suit, white shirt and red tie.

The debate, at Emmis Communications headquarters and broadcast on WIBC-FM, was sponsored by Americans for Prosperity-Indiana, the Hoosier affiliate of the advocacy group founded by the billionaire Koch brothers. On an unseasonably warm evening in Downtown Indianapolis, the pre-debate atmosphere on Monument Circle, near Emmis’ headquarters, was festive.

About 20 Democratic protesters appeared waving signs, chiding the sponsorship of the Koch brothers. About 15 Rokita supporters waved their own campaign signs, with two sporting Barack Obama and Hillary Clinton masks and carrying signs thanking Braun for his support. One was adorned in a milk carton bearing Messer’s picture.

Inside, the candidates found agreement on the need for more competition in health care, on curbing entitlements and for bilateral trade agreements – between America and single countries – rather than multinational deals such as NAFTA that have proven so unpopular in manufacturing states.

The sharpest policy disagreement came on government spending. Debate moderator Tony Katz, a conservative radio host, asked the candidates to explain their votes for a bill that provided additional money for defense spending but added to the national debt.

Messer, who supported the bill, said he did so because Trump and the Defense Department asked Congress to do so to boost defense. “That vote was a vote for our troops, a vote for our national security and, frankly, a vote for this president and his policies,” Messer said.

Rokita, who opposed the bill, blamed Messer and other “establishment Republicans” for creating a “false choice” between defense and debt. He said: “I don’t vote for bills that spend money that has yet to be printed.”

Braun, asked how he would have voted, said he would have opposed the spending bill. He blamed it on a culture in Washington that has repeatedly raised debt ceilings and ballooned the debt. “This has been going on for a long time. This is systemic in D.C. because of the folks who are there.”

The video below shows the closing remarks to Tony Katz’s final question.