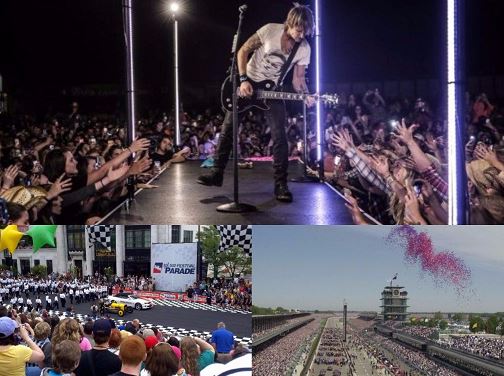 Month-long Excitement Culminates.  Take Part In What The City Offers To Celebrate The 500!

The 500 Festival completes its month-long celebration of all things Indy with a final week of celebration.

Honoring the true tradition of Memorial Day, the event includes a wreath-laying ceremony dedicated to the memory of all Hoosiers in all wars and conflicts who sacrificed their lives in defense of the nation. Names of Indiana service members who have died in the past year are read aloud and memorialized. Monument Circle, 12 noon.

Join Kevin Lee and Curt Cavin for a broadcast of Trackside Live at the Carb Night Burger Bash. The family friendly event is at Pan Am Plaza on Georgia Street for the second straight year, and features food, drinks, and a concert from Trent Harmon to conclude the event.

Pan Am Plaza for a family-friendly event with food and music, 5pm.

Holocaust survivor, activist, and charitable organization founder Eva Kor has the honor of being this year’s Grand Marshal. X Ambassadors, with their hit song “Renegades” – which also celebrates the theme of the parade – will kick off the event at the opening performance. All 33 drivers are honorary grand marshals and will appear in the parade along with scores of bands and floats from local organizations.

The parade starts at noon, and will travel south on Pennsylvania Ave and north on Meridian; click here for spectator information and the route map. 12 noon.

Indy’s premier black-tie optional gala features the theme The Art of the Race: An Interactive Art Event. Elevated food, art, and music from X Ambassadors build up the night. 6pm. Qualifications wrapped up on Sunday, May 21, with the last practice held on Monday, so the field is set. (See early May’s post about how qualifications worked this year.) But there’s still lots to do before the green flag drops.

The Indy Lights Freedom 100 race (40 laps in length) begins at 12:30pm, but there is a brief practice session for the main event drivers at 11am.

The Pit Stop Challenge, a popular event every year, follows the race and ends at 3pm.

The track opens in the morning for spectators to see the memorabilia show, the public drivers’ meeting, watch laps from historic race cars, as well as attend an autograph session with the field of 33.

Gates open at 6am. Tune to 1070 The FAN or 93.1 WIBC for up-to-the-minute traffic reports, parking lot capacity information, and anything you’d want to know about getting to the “Greatest Spectacle in Racing”: the 101st running of the Indianapolis 500.

Yep, there’s a concert on race day, now, too. The Snake Pit keeps its hard partying reputation and will feature a lineup of EDM and hip hop artists, headlined by Zedd, Marshmello, and Action Bronson.