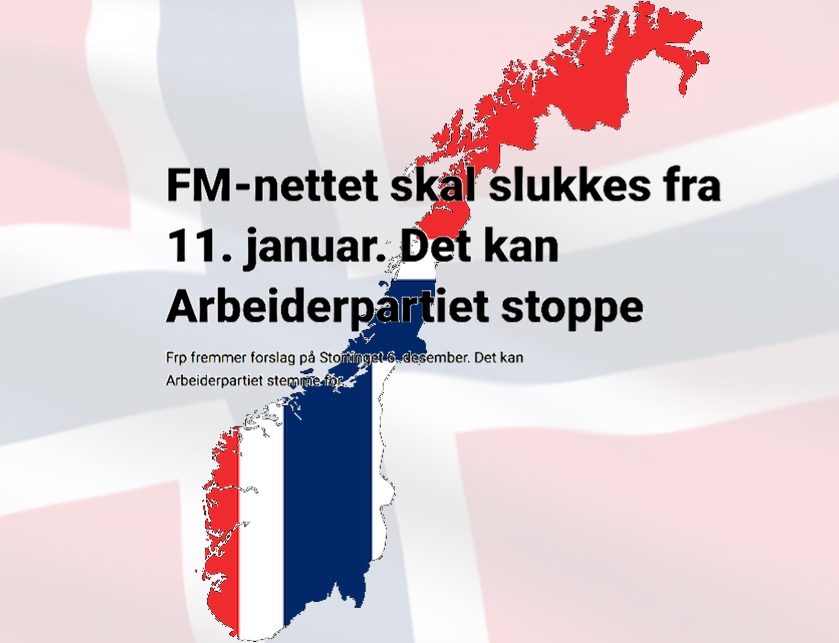 Could This Ever Happen In America?

Last month the Norwegian government approved the complete shutdown of its FM signals; its MW, or AM, signals are already gone.

Instead, radio in Norway now is to be entirely DAB (digital audio broadcasting) through new licensed spectrum and delivered over new transmission infrastructure.

Other nations are eyeing Norway, and asking themselves if a wholesale abandonment of broadcasts between 88 and 109 MHz, in favor of DAB broadcasts is a wise idea.

It’s a controversial move.  An opinion poll published in Norwegian daily Dagbladet in December showed that some 65% of Norwegians opposed the end of FM broadcasts.

Some 2 million vehicles in Norway do not have DAB receivers, Reuters reports.  This could result in people missing emergency alerts.  The average cost of a DAB-enabled car radio is $176, or 1500 Krone.

Could such a scenario happen in the U.S.?  Highly unlikely.

Norway is a very different marketplace than the U.S.  Most all stations in Norway, especially those outside major cities like Oslo, are directly controlled by NRK and the Norwegian government.

The U.S. has over 10,000 licensed commercial stations; two-thirds of them on the FM band.  Not only does this mean domestic consumers have plenty of choices using existing radio receivers, it also means there are thousands of owners who’d be forced to make very expensive equipment spends for DAB broadcast towers.

An eventual all-digital FM solution for America likely resides with HD Radio.  It uses the existing FM spectrum allocation to add digital channels in the side band protection area while providing for an eventual upgrade.  The transition costs for broadcasters to HD Radio are cheaper, and receivers consumers need less costly than DAB; plus the government does not have to license new spectrum, which is very scarce, to broadcasters.